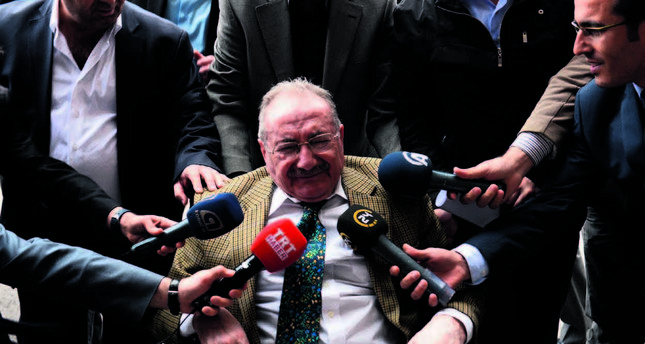 Fleeing from prosecution and limits on freedoms, many Kurdish intellectuals who went abroad are slowly returning to their homes due to the reconciliation process

ISTANBUL — Turkey's reconciliation process has encouraged Kurdish politicians, intellectuals and artists living in exile to return home as the new open environment allows more freedom to speak out about the Kurdish community's rights.

In the past decade, through the government's efforts Turkey confronted demons from its past, namely bans imposed during postcoup martial law on the freedom of speech, especially for the Kurdish community. The reconciliation process launched by the government to put an end to the Kurdish question plaguing the country for years aims to make amends for the mistreatment of Kurds.

Şerafettin Kaya and Yusuf Serhat Bucak are among the Kurds who plan to return. Şerafettin and Bucak were co-defendants of a trial on a banned pro-Kurdish party along with Yaşar Kaya.

Arrest warrants were issued for its members. An Ankara court recently rescinded the arrest warrants on the condition that the defendants testified before the court within three months. Yaşar Kaya arrived last week and his testimony before the court made him immune from being charged again in connection with the party. He was one of the six deputies who were arrested in 1994 and sentenced to 15 years in prison.

Şerafettin Kaya will arrive in Turkey on April 28. Now in his 80s, Şerafettin Kaya was first detained by a martial law court in the southeastern Turkish province of Diyarbakır following 1971 coup after he stepped forward to defend Kurdish political prisoners as a lawyer.

He was tortured in prison and faced trial for his defense of Kurds' rights. He left Turkey in 1982, two years after a military coup made life unbearable for pro-Kurdish activists. Since then, he has been living in Germany and was a member of the Kurdish parliament. Speaking about his father's return, Burhanettin Kaya, who resides in Ankara, said, "I am very excited.

My father has been abroad for 32 years and I spent my youth far from him. I was only able to spend one week every year with him. We did not have time to share our joy or grief. He is 81 and has not seen his country for years. He recently underwent a surgery, so he will rest for a while after he arrives in Ankara. Then we will go to his hometown Muş." Burhanettin Kaya said he hoped all others forced to live in exile will be pardoned.

Bucak, another lawyer who faced convictions in Turkey, plans to return to Turkey from Germany in May.

Şerafettin Kaya and his friend Ruşen Arslan were the subjects of a documentary entitled "Diyarbakır: Ashamed of Being Unlawful." The documentary, shot in 1993, was banned for years and only screened last year in Turkey. It offers insight to the ordeal Kaya and Arslan underwent at Diyarbakır prison, a place notorious for torture.

Speaking about the documentary, Arslan said that he and others were imprisoned for openly stating the presence of Kurds in Turkey. "Now we have a state-run television broadcasting in Kurdish.

Important steps were taken," he said during the documentary's screening last year.

The reconciliation process to end the threat by terrorist organization PKK and address the problems of Kurdish community began in early 2012. The government pledged democratic reforms to empower minorities, particularly the Kurdish minority, which is by far the largest at 18 percent of the population. In September of last year, Prime Minister Recep Tayyip Erdoğan announced a democratization package that introduced broader political rights, education in one's native language and tougher penalties for hate speech.

The government formed a commission of "wise men," or a group of intellectuals and prominent public figures tasked with touring the country to explain the process to the public.

Later, the PKK announced a de facto withdrawal from the Turkish territories to northern Iraq. The PKK has led a campaign of terror in Turkey since 1984 in its fight for self-rule in the predominantly Kurdish southeastern part of Turkey. PKK attacks claimed more than 40,000 lives over years of fighting.

Since the PKK grew in strength, it was unofficial state policy to exert pressure on Kurdish civilians to eradicate the PKK threat. Those efforts to curb the Kurdish public's support for the PKK backfired and instead alienated the community. It also dealt a blow to the economic development of southeastern and eastern Turkey, where PKK concentrated its bloody campaign.

Under the AK Party government, the solution to the Kurdish question seems closer, though more progress is needed for a comprehensive solution. The lifting of bans on Kurdish politicians is an integral part of new policy to address the question.
Last Update: Apr 21, 2014 9:30 pm
RELATED TOPICS