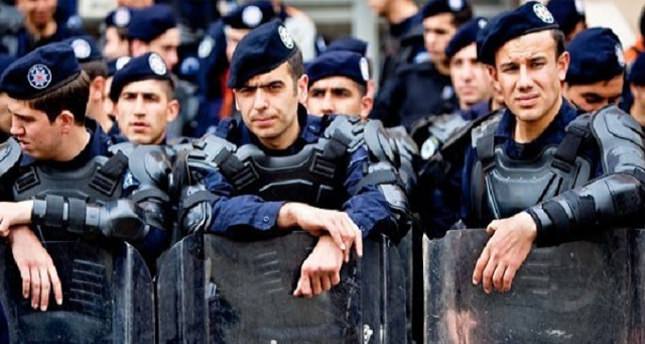 The Istanbul police are improving their technical infrastructure to protect its network against illegal wiretapping. The Gülen Movement is accused of using its members within the police to illegally wiretap government officials

ISTANBUL — In the wake of Dec. 17 and Dec. 25 operations launched by Gülen Movementaffiliated police officers and prosecutors, Istanbul Police Directorate reinforced its technical infrastructure against illegal wiretapping by Gülenist infiltrators in the law enforcement and curb further infiltration into its systems.

Chief inspectors of the General Directorate of Police carried out an investigation at the Istanbul Police Directorate. The investigation targeted irregularities and staff involved those in irregularities. Inspectors also examined the level of security at all departments with regard to the leaking of confidential information and illegitimate use of equipment, namely surveillance tools.

A team of six investigators examined computers, telephone and Internet networks, fingerprint databases and security camera systems at the Counterterrorism Department where Gülenist infiltrators kept an archive of illegal wiretappings. The recordings were allegedly conducted for the Ergenekon and Balyoz cases, two operations against defendants accused of plotting to overthrow the government.

According to some defendants, the Ergenekon and Balyoz trials were attempts to put critics of the Gülen Movement behind bars. After the illegal wiretappings by the Counterterrorism Department were revealed, 12 involved police officers were suspended.

Software and hardware used at the Istanbul police directorate were also examined on suspicion that Gülenists took advantage of bugs in the computer network, though no security vulnerabilities were found. Nonetheless, the network's security was bolstered against external threats. This move follows a ban on connecting peripheral devices such as USB hard drives to computers and a better password application for accessing the system.

The investigation also covers the police directorate's public tenders. Sürat Teknoloji, a subsidiary of Kaynak Holdings, was contracted for the installation of Mobile Electronic System Integration (MOBESE) or a network of omnipresent security cameras. MOBESE is an effective system to track criminal activity but can also be used to destroy evidence. Sürat Teknoloji was also contracted for the installation of systems at the Command Control Center and police hotline 155 that responds to criminal cases.

Kaynak Holdings, known for its ties to the Gülen Movement, was the subject of an investigation in March over tax evasion and other irregularities. Sürat Teknoloji is employed by several public companies as well as a large number of private companies affiliated with the movement. It provides technical infrastructure services for municipality companies in Istanbul such as water and natural gas utilities, as well as Istanbul Municipality's IT company, Belbim. Along with five other companies tied to Gülenists, Sürat was awarded installation and maintenance work for police directorate departments tasked with surveillance. Kozanlı Ömer was behind the scheme to award the tenders to Gülenist companies. Ömer, whose real name is Osman Hilmi Özdil, came under the spotlight after Gülen-affiliated prosecutors and police chiefs led the Dec. 17 probe aimed at discrediting the government. He is the alleged imam, or point man, of the movement within law enforcement agencies and conveys the movement's instructions to Gülenist loyalists within the police department.

Sürat Teknoloji was also the company that conducted an investigation of security camera footage related to the attack on a young woman in Istanbul's Kabataş neighborhood. Zehra Develioğlu was attacked by a group of Gezi Park protesters on June 1, 2013 while trying to cross the street with her baby. She claims she was verbally and physically attacked by protestors until she passed out. Sürat Teknoloji officials claimed the attack did not take place as Develioğlu claimed but the footage was found to be tampered with.