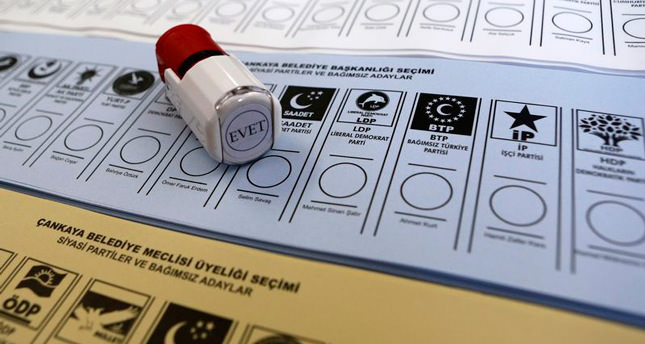 by AA
Apr 22, 2014 12:00 am
ANKARA — Turkey is getting ready for its presidential elections scheduled for August 10, which will enable Turkish citizens to choose their president by direct vote for the first time in the Republic's history. The poll comes after more than two-thirds of Turks voted in a constitutional referendum on 21 October 2007 to elect the president by popular vote instead of by parliament, decreasing the presidential term from seven years to five and allowing the president to run for a second term.

The election has to be held within 60 days before the end of the seven-year tenure of incumbent President of Turkey Abdullah Gül, which will expire on August 28. As announced in a ruling of Turkey's Supreme Electoral Board, the first round of the election will be held on August 10 and the second on August 24.

The candidate getting 51 percent of the votes in the first round will be directly elected, but if all candidates fail to reach that percentage of votes, voting will go to a run-off. For the presidential election, Turkish authorities are planning to put up ballot boxes in 56 countries and 118 foreign missions.

The first round voting for Turkish expat voters will be held between 31 July and 3 August while another round will be held, if necessary, between 17 and 20 August. According to the new Law on Presidential Election, the nomination of a person among Turkish Parliament lawmakers or outside the parliament will be possible via a written bid from at least 20 lawmakers, where each can present only one candidate.

The names and the nomination papers will be offered to the Office of the Turkish Parliamentary Speaker or the Supreme Electoral Board before a deadline yet to be announced by the electoral board itself. Once the candidate list is finalized, the nominees - if they are public officers, judiciary members, mayors or army officers - will be regarded as resigned from their posts as of the finalization date.