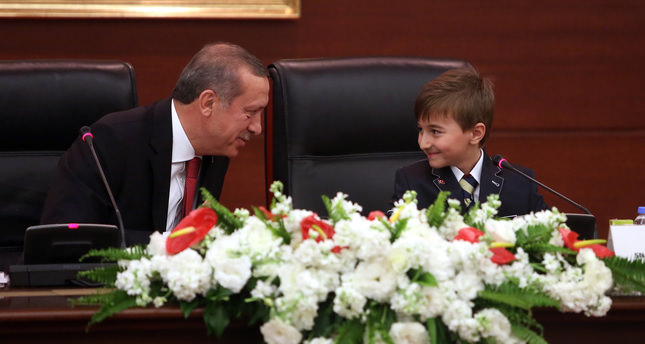 ANKARA — Minister of National Education Nabi Avcı paid a visit to the Prime Minister's office on Wednesday with a group of children celebrating on April 23.

As Atatürk dedicated the Republic to children, a ceremony is therefore held with school children taking seats in Parliament for the day to discuss matters concerning children. And this years' honorary PM was primary school student Göker İnan.

Prime Minister Tayyip Erdoğan welcomed the children with a speech, giving them short some advises.

Erdoğan said he believes today's children able to carry the national will and sovereignty to a better level in future, "If a nation is well educated, the future is to be bright," Erdoğan said.

PM Erdoğan added that the legal age of voting and candidacy is eighteen in EU countries and Turkey has the will to set it to 18 as well.

National Sovereignty and Children's Day marks the first gathering of the Turkish Grand National Assembly, which took place in 1920 during Turkey's War of Independence. Called Children's Day for short, the Republic was dedicated to children by Atatürk, the founder of the Republic of Turkey.