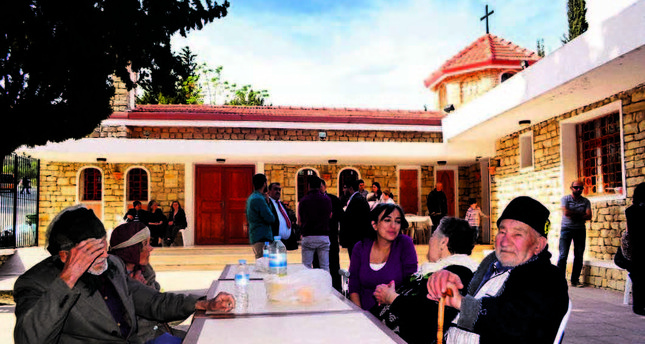 The Turkish Foreign Ministry is working to relocate Syrian- Armenians currently in Turkey to Lebanon, where their relatives reside. Many of the refugees, all of whom who fled fierce fighting in their home country, do not possess passports

ISTANBUL — Syrian Armenians taking shelter in Turkey will travel to Lebanon where their relatives live thanks to the assistance of the Turkish Foreign Ministry. The ministry has launched efforts to provide a passage for those Armenians who do not hold passports.

Turkey is hosting 22 Syrian Armenians who were forced to flee Kasab, a town near the Syrian-Turkish border, as clashes between rebels and Syrian regime forces spilled over into the vicinity of the predominantly Armenian town.

They are being accommodated in Vakıflı, a Turkish Armenian village in the southern Turkish province of Hatay. Of the 22 Armenians, 17 appealed to Turkish authorities to facilitate their transfer to Lebanon as they do not have passports.

Cem Çapar, head of the Surp Asdvadzadzin Church Foundation in Vakıflı that provides humanitarian assistance for Syrian Armenians, said the organization conveyed the refugees' request to the Foreign Ministry. "The ministry will issue them travel documents and authorities contacted Lebanese officials for their admission to that country. We hope the process will be completed as soon as possible,"
Çapar said.

Kasab is located only three kilometers from the Turkish border. "Rebels brought our brothers and sisters here last month. They lost their possessions and were separated from their families. We work here to make them feel at home," Çapar said. After clashes escalated, the 2,000 Syrian Armenians living in Kasab, where about 80 percent of the population is Armenian, left for Latakia, a city on the Mediterranean coast of Syria.

Çapar said eight Armenian residents of Kasab were missing. "The Turkish Armenian Patriarchate asked for help from the Foreign Ministry to locate those missing people," he added.

Most Armenians hosted in Vakıflı are elderly people in their seventies. The local governorate dispatched a team of doctors to the village to perform medical examinations for the Armenian guests. Belinda Maşalı, a psychiatrist from Yedikule Surp Pırgiç in Istanbul, a hospital run by an Armenian foundation, also visited them. Maşalı said the conditions of the refugees were better compared to the day they arrived.

"They sleep better. Staying in an Armenian village and being able to speak the same language with people here makes them feel safer. They are concerned about their future but the prospect of staying with their relatives in Lebanon obviously relieves them," she said.

On Monday, another resident of Kasab was brought to Hatay's Yayladağı district. George Kurdmusyan, 72, having been treated in an opposition-held hospital in Kasab, will be transferred to the Vakıflı village where fellow Kasab residents are sheltered.

According to unofficial figures, Lebanon is home to a small community of about 200,000 Armenians who migrated to the country in the early 1900s.

Syria has been gripped by almost constant fighting since Syrian President Bashar Assad's regime responded to anti-government protests in March 2011 with a violent crackdown, sparking a conflict that spiraled into a civil war.

The civil war, which entered its fourth year last month, claimed more than 140,000 lives, according to the London-based Syrian Network for Human Rights.

As the conflict spilled over to Kasab, a defamation campaign against Turkey was launched by some groups within the Armenian diaspora. Turkey denied allegations that it hosted al-Qaeda and militants from similar groups and helped them carry out attacks in Kasab.

The number of Armenians living in Syria is estimated at about 100,000, though the number decreased since the conflict broke out in Syria.

Most of the Armenian community is located near the Turkish border in Aleppo, Qamishli, Latakia, Kasab and Yacoubiyah, cities and small towns in northern Syria.
RELATED TOPICS