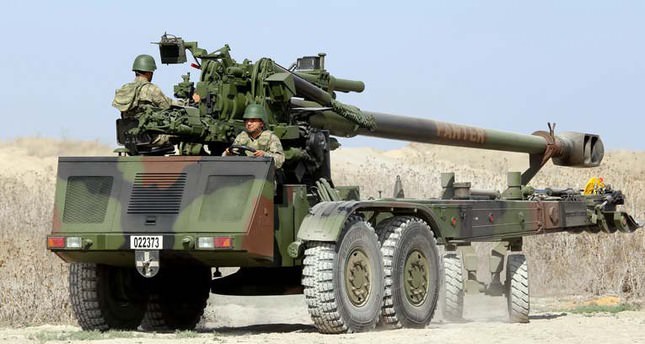 by AA Apr 24, 2014 12:00 am
ANKARA — Military reinforcement at Turkey's Suleiman Shah Tomb territory in Syria is simply a planned activity and not extraordinary, Turkey's Land Forces Commander has said.

Full General Hulusi Akar made his remarks to the press as he attended a reception held for the 94th anniversary of Turkish Parliament in Ankara on Wednesday.

Responding to a question on whether a military convoy entering Syria meant a reinforcement for existing troops in Turkey's only territory beyond its borders, Akar said Prime Minister Recep Tayyip Erdoğan and Foreign Minister Ahmet Davutoğlu had already made the necessary statements on the issue.

Akar said the efforts of the Turkish Armed Forces continued to "fulfill the given duties effectively in the Syrian border internal security operation zone. These are planned activities, nothing extraordinary".

At a April 23 Children's Day ceremony earlier on Wednesday, Premier Erdoğan said the convoy's aim was not to fight with the Islamic State of Iraq and the Levant, but to transport aid to the Turkish military post of Suleiman Shah Tomb, 25 kilometers from the border.

The tomb forms Turkish territory according to international law, and is currently under threat due to an increase in fighting between the Syrian opposition and the Islamic State of Iraq and the Levant, or ISIL, in the area.

Turkey's foreign policy chief Davutoğlu said: "All necessary measures will be taken for the safety of our soldiers there. There can be routine changes. The existing soldiers are taken and others come in. It is done according to the nature of the necessity and the conditions."