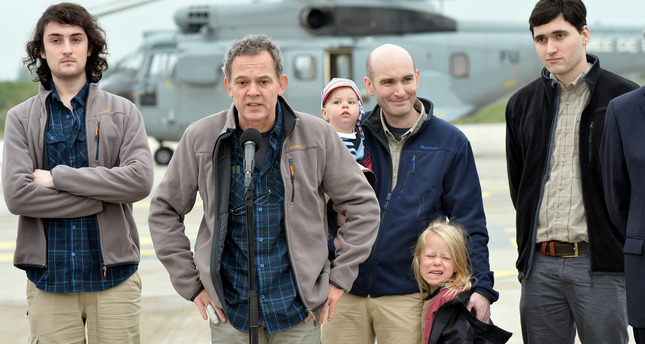 French media reported that it was Turkish intelligence that rescued four French journalists last week from kidnappers in Syria.

Edouard Elias, Didier François, Pierre Torres and Nicolas Henin were kidnapped 10 months ago while they were in Syria to cover the ongoing conflict between rebels and the Bashar al-Assad regime.

Initial reports said four men were found near the Syrian-Turkish border after they were dumped by their abductors there. But new reports emerging in the French media show that French intelligence cooperated with Turkey's National Intelligence Organization (MİT) in their rescue.

Le Monde reported the French intelligence agency, the General Directorate for External Security (DGSE), was closely monitoring the situation of the journalists immediately after their kidnapping, and the location where they were held was known by intelligence officials.

French officials contacted various intelligence services including British, Spanish and U.S. intelligence to help in the rescue of the journalists, but it was Turkey that provided "real" cooperation, according to media reports. French intelligence reportedly contacted the abductors and regularly acquired updates on the condition of the hostages, including video footage.

Sud-Ouest, a French daily, claimed French Defense Minister Jean-Yves Le Drian secretly traveled to Turkey a couple of weeks ago and held talks with Turkish authorities on plans for the release or rescue of the hostages.

French and Turkish intelligence organizations agreed to reject paying the ransom demanded by terrorist organization the Islamic State of Iraq and the Levant (ISIL), which held the journalists hostage.

Turkish intelligence, which has comprehensive knowledge of Syria, arranged a plan to rescue the four men and carried out the plan last week, though no details on how the journalists were saved surfaced.

The journalists arrived in France last Sunday and French President François Hollande thanked Turkish authorities. The journalists themselves said they were rescued "thanks to Turkey." On Tuesday, a high-ranking official from the French Ministry of Defense visited Turkey and held talks with officials. It was reported the official thanked Turkish authorities for the rescue operation.