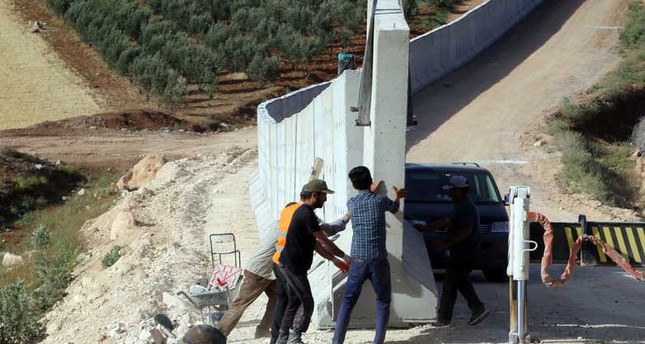 by Daily Sabah Apr 27, 2014 12:00 am
HATAY — Wall erected on Turkish-Syrian border to prevent smuggling Turkey is building a portable concrete wall on its border with Syria to deter illegal crossings and smuggling. The barrier, which measures 30 centimeters thick and three meters high, extends to a length of about 1,200 meters.

The nine-ton wall can be easily dismantled and moved to a new location. Currently, it is located in Kuşaklı, a village in the Reyhanlı district of Hatay province bordering Syria. So far, 150 slabs have been installed in two days.

Turkey shares a 915-kilometer border with Syria. Throughout the three years of conflict in neighboring Syria, Turkey has seen a sporadic spillover of violence into its territory. Since the conflict broke out in Syria, smuggling from that country has also escalated. On a number of occasions, large groups of armed smugglers have clashed with Turkish security forces on the border. With the conflict escalating, Turkey reinforced its security forces deployed along the lengthy border.

Certain Turkish border crossings into Syria are closed, but the country occasionally allows Syrian refugees fleeing the conflict to enter Turkey where they are hosted in refugee camps.