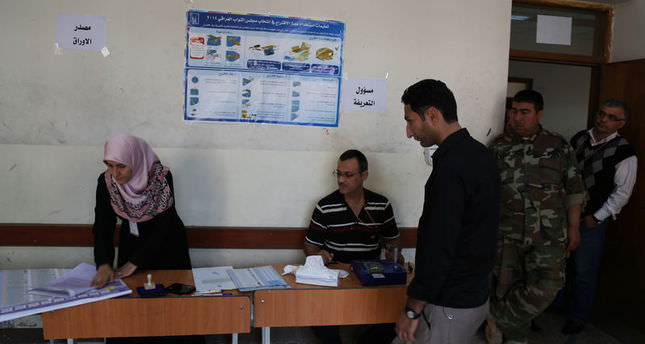 by daily sabah
Apr 28, 2014 12:00 am
ISTANBUL — Iraqi citizens will go to the polls on April 30 to participate in the first national election since U.S. troops withdrew from the country in 2011. Iraqi Turkmens residing in Turkey, like fellow Iraqis living abroad, cast their vote for the elections on Sunday and Monday at polling stations which were set up at one school in the capital Ankara and three schools in Istanbul. Although the voting will take place amid violence and sectarian strife which has claimed thousands of lives, Iraqi Turkmen hope the country will not be dragged into a full sectarian war following the upcoming general elections. "Together we can reform the political process because in the current condition we cannot move. We have to make a change on the basis of cooperation to meet the expectation of our people," said Aydın Beyatlı, secretarygeneral of the Federation of Türkmeneli Associations.

The upcoming parliamentary polls, in which 20 million Iraqis are eligible to vote, come amid an uptick in militant attacks in the northern and western regions of the country, which have also spilled over into Baghdad. Describing the upcoming elections as an "historic threshold" for the Iraqi Turkmen, Beyatlı said there was hope to bring democracy, peace, stability and prosperity to Iraq. "Turkmen must vote, it is crucial.

We need more Turkmen participating in the polls to send more MPs to the parliament," he said.