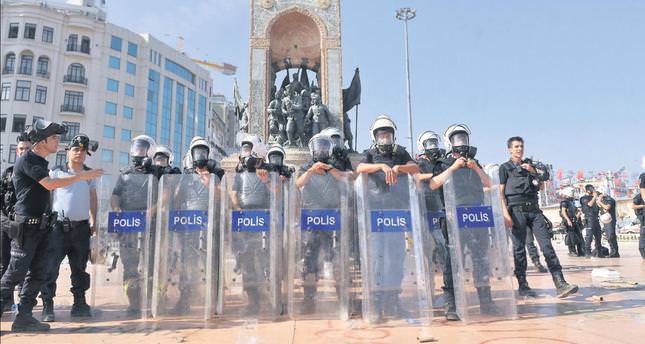 The governor, who has been criticized for disproportionate use of force against protesters, spoke about the demonstrations that evolved into violent riots. He said protesting groups were allocated another location to hold rallies against the redevelopment of Gezi Park but they rejected it. "We allocated them to the area in front of Galatasaray High School, the best place to make your voice heard in public so that they could execute their freedom of expression efficiently," he said.

Mutlu said Gezi Park protests caused grief due to deaths of protesters. "Life is sacred above all. I convey my condolences to the families of victims," he said.

He said tensions rose due to a misunderstanding. "Environmentalist groups sincerely devoted to the preservation of Gezi Park were convinced that the park will be demolished while the redevelopment was simply about the relocation of about 15 trees in the park.

As governorate, we failed to inform the public properly. If we could have succeeded in handling the situation in the beginning, there wouldn't be [riots]. We could have acted faster and informed the public, media and everyone about the plans on the park accurately. In addition, those sincere groups dedicated to the park's preservation were intimidated by the burning of their tents," he said, referring to municipality officials burning down the tents after forcing protesters out of the park overseen by the municipality. "This has been a lesson to us. The situation could have been handled better and differently," he stated.

Mutlu admitted the government did not predict the protests would become a nationwide phenomenon. "We were not aware of this when protests first started. We didn't expect it. For us, it was a common protest and we failed to grasp what the protests meant," he said, referring to the evolution of demonstrations to anti-government protests and later, into riots where terrorist organizations incited anarchy.

A report prepared by Interior Ministry inspectors surfaced earlier this month depicted the Gezi Park protests as "insurrection" and defended oft-criticized police intervention as legitimate. The report acknowledged instances of disproportionate use of force and blamed the involvement of radical groups for violent riots during the protests.