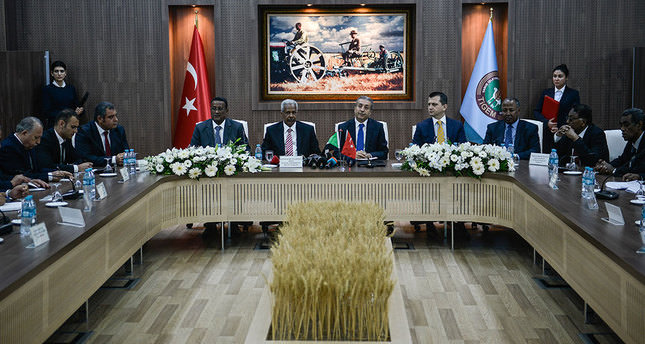 by AA
Apr 29, 2014 12:00 am
ANKARA — Turkey has signed an agriculture cooperation agreement with Sudan, which gives Turkish General Directorate of Agricultural Enterprises and Turkish companies several options to operate in the north African state.

According to the deal agreed on Monday, the Turkish General Directorate of Agricultural Enterprises (TIGEM) and Turkish companies can invest directly in Sudan, engage in partnerships with local partners or fund agro-processing and food production projects.

Sudan has very large agricultural land and the rainwater is enough for irrigation in some regions of the country, said Turkey's Food, Agriculture and Livestock Minister, Mehmet Mehdi Eker, at a signing ceremony in the TIGEM conference center in the Turkish capital of Ankara.

"The agreement is the first for Turkey. Turkey´s TIGEM and an institution from Sudan will establish a joint-venture company. The company will rent 780,000-hectares of land for the long-term in Sudan. We have already set the land for this. Turkey will help with its technology, mechanization and animal breeding. The company will export its production to the world," he said.

The accord aims to use Sudan´s land resources and export surpluses to Turkey and the rest of the world to contribute to solving the world's food shortage before another price hike in food prices, Ibrahim Mahmoud Hamid, Minister of Agriculture of Sudan said.

"Food prices in the world have been increasing since the 2008 crisis. Drought in Australia and the U.S. and tensions in Ukraine will hike food prices again. Sudan has fertile land with water facilities and Sudan will benefit from this," said Hamid.

Badr El-Din Mahmoud Abbas, Minister of Finance and National Economy of Sudan, said the agreement between two countries will encourage more investment in Sudan and will create a solid partnership for further economic corporation between the two countries.

"After this agreement, Sudan will use more efficiently its natural resources of land and the Sudan government wants Turkish private sectors to invest in Sudan and we are always ready for help," Abbas said.

Before the signing ceremony, Ali Babacan, Turkey's deputy prime minister in charge of the economy, received Badr El-Din Mahmoud Abbas, Minister of Finance and National Economy of the Republic of Sudan, Ibrahim Mahmoud Hamid, Minister of Agriculture and Irrigation Engineer and Abdelrahman Hassan Abdelrahman, the Hashim Governor of the Central Bank of Sudan in his office; in the presence of a number of officials from both parties.

According to the Turkish Statistical Institute, trade between the two nations stood at US$295 million in 2013.

The countries also signed a Memorandum of Understanding to set up a free-trade zone for agricultural products and livestock to boost bilateral transactions and agreement for investment protection for private companies.

Meanwhile, with the world's population reaching more than 7 billion people, food prices keep rising every year. Freshwater supplies in plenty of areas are dwindling and climate change is bringing drought in some regions.

Sudan was the largest country in Africa before the cession of South Sudan and loss of one-third of its land and two-thirds of its natural resources, covering almost 1 million square miles.

Chinese state corporations, well known for their interests in minerals and oil, appear to be one of the more modest "land grabbers" in Africa, operating in countries such as Sudan and Ethiopia.

Other countries are India, South Korea, America (Wall Street firms) and several oil-rich, food-poor Arab nations.
Land-grabbing has been accelerating ever since a massive surge in grain prices back in 2008.