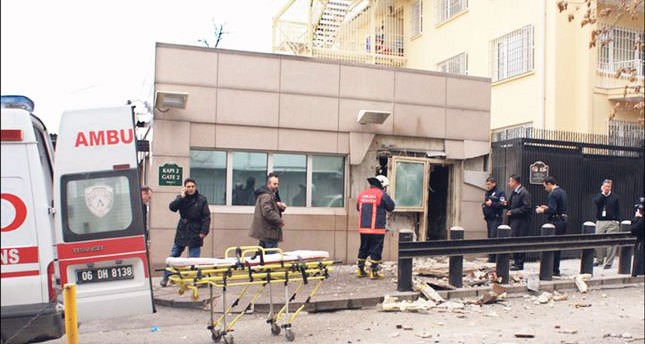 A new indictment of the terrorist organization the Revolutionary People's Party-Front indicates that the group, which was involved in the bombing of the U.S. Embassy in Ankara last year, has difficulty in recruitment and its members pose as families or students to stay together and avoid detection

TURKEY — Indictment by a prosecutor on DHKP-C attacks targeting the headquarters of the Turkish police directorate and a police guesthouse in the capital Ankara last year reveals the details about the inner workings of the terrorist organization.

In his indictment, prosecutor Kemal Çetin said the organization is ruled by cochairmen.

The indictment states that due to difficulties in recruitment, the DHKP-C decreased its number of members tasked with attacks from three to two.

The indictment also includes testimony of a secret witness. The witness stated that DHKP-C sleeper cells were changed and instead of accommodating members not related to one another in safe houses, the organization places male and female members posing as families or married members together and chooses houses where students stay in order not to draw suspicion. The witness also claims the would-be assailants are chosen from among people wanted by the police and sent to Greece where the organization's training camps are located.

The DHKP-C attempted to stage a comeback by launching rocket attacks against the police headquarters and the guesthouse in 2013. The attack inflicted damage on buildings but no security personnel were injured or killed. One injured assailant was captured while another was killed after engaging in a clash with law enforcement officials who pursued him. The indictment is about Serdar Polat, the assailant captured alive. Polat pleaded not guilty to the charges.

Describing the DHKP-C's structure, prosecutor Kemal Çetin said in the indictment that members of the "party" or so-called political wing of the terrorist organization are people "prepared for all sorts of attacks" and are "estranged from their families." In terms of gaining membership, the leadership requires applicants to be over 18 years of age to join the "front" armed wing of the organization and they must have recommendations from two incumbent party members and their superior in the "front." The indictment says membership is assessed during a six-month process and unqualified members are sent back to the "front" to carry out new attacks. Membership to the "front" is accepted after recruits take an oath. Every party member can also work as a "front" member and be involved in attacks.

The indictment says terrorists conducting attacks in Turkey are called "urban units for armed propaganda" and act upon the orders of the leadership based abroad. Serdar Polat worked for Yürüyüş, a magazine affiliated with the DHKP-C until 2011 and was a member of the terrorist organization's unit in Tunceli, a province in eastern Turkey, according to the secret witness.

The prosecutor noted that the DHKP-C had three-person teams to conduct attacks in the beginning but as they had trouble finding new recruits, attacks are now being carried out by two-person teams. The DHKP-C also turned to suicide bombings instead of armed attacks, according to the indictment. "They prefer all-out attacks rather than attacks with minimal casualties of its members," the indictment reads.

On the Ankara attacks, the indictment said the suspects entered Turkey from Greece using forged passports. In a hearing on the attacks held last week, Serdar Polat denied charges and did not make a statement of defense on the grounds that a private meeting with his lawyer in prison was denied. The trial was adjourned. The prosecutor is asking for a life sentence in solitary confinement for Polat on charges of attempting to overthrow the elected government - a charge related to membership in a terrorist organization - attempted homicide, damaging public property and possession of weapons illegal for civilian use.

The DHKP-C, founded in 1978 as a Marxist-Leninist party, was designated a terrorist organization by Turkey, the U.S. and the E.U. Under the name of Dev Sol until 1994, the organization claimed responsibility for a series of high-profile murders, including the assassination of nationalist politician Gün Sazak and former Prime Minister Nihat Erim in 1980. The group also killed several Turkish intelligence officials. In 1994, it was founded as the DHKP-C after Dev Sol splintered.

The DHKP-C attempted to stage a bloody comeback in the last two years by carrying out attacks against the police. In 2012, about 10 years after its last known lethal attack in Turkey, the DHKP-C conducted a suicide bombing at a police station in Istanbul, killing a policeman.

It claimed responsibility for a suicide bombing at the U.S. Embassy in Ankara, which killed a Turkish security guard and injured a Turkish journalist in February 2013.

This was followed one month later by rocket attacks against the Ministry of Justice in Ankara and the headquarters of the ruling AK Party.

No casualties were reported in those attacks.

Earlier this month, the U.S. announced bounties of $9 million in total (TL 19.24 million), $3 million each, for information leading to the capture of the three leaders of the DHKP-C.