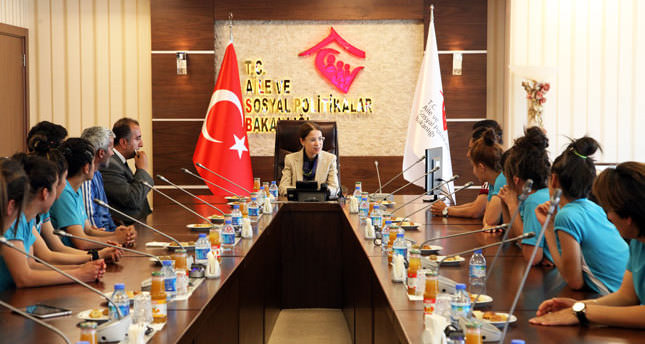 by AA Apr 30, 2014 12:00 am
ANKARA — A series of draft laws covering child and sexual abuse are set to be made public, Turkey's family and social policies minister has said. Minister Ayşenur Islam said in a press conference Thursday that the drafts had been prepared in consultation with Prime Minister Recep Tayyip Erdoğan and Justice Minister Bekir Bozdağ and would soon be put on the agenda of the Turkish parliament.

The government's new steps come after recent murders raised concern in Turkey over child abuse. Earlier this week the tied-up body of a six-year-old girl, who had been stabbed to death after going missing last Sunday, was found in the southern Turkish city of Adana. The bill will increase the punishment for sexual crimes committed against adults as well as children. Forced marriages penalized Under the proposed laws, those who commit abuse would undergo psychiatric or chemical treatment to "set the perpetrator to normal mode," Minister Islam said.

The bills will also ensure that any perpetrator who has committed a sexual crime against children is forced to stay away from them for the rest of their lives. Another draft law will also penalize forced marriages. Islam said that children under the compulsory 4+4+4 education system (four years of primary education at a first level, four at second and four at secondary education) would not be allowed to enter a forced marriage. A 12-year-old child will be obliged to go to school until she is 18 and the education system will help prevent forced marriages, she added.