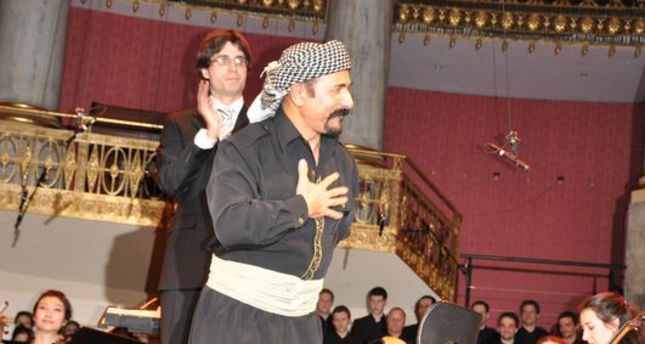 by daily sabah
Apr 30, 2014 12:00 am
ISTANBUL — Sharing the stage last year in the southeastern Turkish city of Diyarbakır, popular Turkish singer İbrahim Tatlises and Kurdish musician Şivan Perwer performed together in northern Iraq on Monday. Tatlıses gave a concert during the rally of the Kurdistan Democrat Party (KDP) under the leadership of Mesut Barzani. During his visit, Tatlıses showed his support to the KDP for the parliamentary elections.

According to the local channel Rudaw TV, Tatlıses was invited by Barzani.

Tatlıses stepped up to the rostrum at the stadium of Zakho. Nechirvan Barzani, the prime minister of the Kurdistan Regional Government (KRG) also participated in the rally campaign. "As Prime Minister Recep Tayyip Erdoğan mentioned, we want to see peace and love in Iraq. Long live peace and long live love!"

Tatlıses exclaimed. Tatlıses said he is always willing to serve the Kurdish people and humanity as Perwer does. He asked, "Who am I?" in Kurdish, and people cheered, answering with Tatlıses' famous nickname, "İbo." Tatlıses referred to Barzani as an important leader of the Kurdish people and extended his wishes for Barzani's continued leadership in what he called Kurdistan. Tatlıses performed his renowned songs at the stadium.

Although he comes from Şanlıurfa, he said that he feels at home in Zakho.