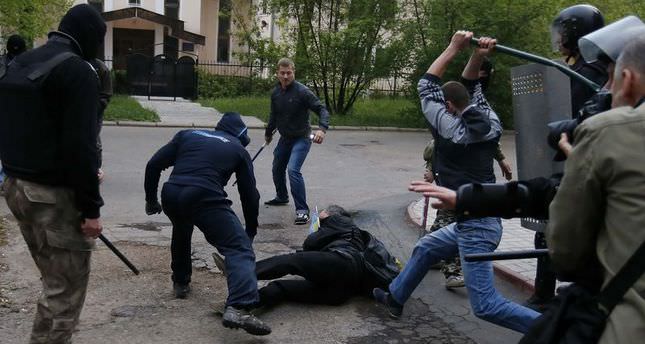 by AA Apr 30, 2014 12:00 am
ANKARA — Turkey is worried over the latest developments in Ukraine's east and south regions, despite the Joint Declaration of Ukraine, Russia, USA and the EU on April 17.

In a statement issued on Wednesday, Turkey's Ministry of Foreign Affairs said the situation is deteriorating in the east and south of Ukraine with pro-Russian separatists occupying buildings and pro-Russian militants abducting international monitors from the Organization of Security and Cooperation in Europe (OSCE).

The ministry also called for the implementation of Geneva Declaration and reiterated its support for the peace, consistency and security in Ukraine.

On Friday, armed pro-Russian militants in Slavyansk abducted seven international monitors from a military observation group, connected to the Organization of Security and Cooperation in Europe (OSCE) and five Ukrainian soldiers, according to Ukraine's Interior Ministry.

On Wednesday, Russian President Vladimir Putin criticized U.S. and EU sanctions against his country and claimed that, although there are no immediate plans to retaliate, if the measures continued Russia would respond.