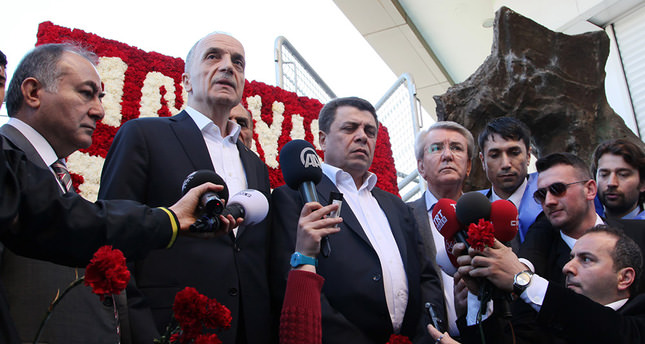 by Daily Sabah May 01, 2014 12:00 am
ISTANBUL — A crowd consisting of administrators and members of the Confederation of Turkish Trade Unions (CTTU) gathered on Thursday in front of the CTTU Gümüşsuyu office to commemorate the death of 34 people in the 1977 Taksim Square massacre.

The crowd marched up the Kazancı slope carrying a memorial wreath. The chairman of CTTU, Ergün Atalay, held a speech at after the march saying "Unfortunately it has been 37 years and we still do not know the killers of our 34 brothers. Nobody knows why and for what reason they were killed," "...we want to know the reason of this massacre."

Atalay said CTTU hopes for a peaceful 1 May celebration this year, without experiencing any problems.

The Taksim square incident happened on 1 May 1977, during the international labor day celebrations. Shots were fired from an unknown source in the middle of the celebration and took the lives of 34 and left 126 injured. The Taksim Square massacre still remains a mystery after 37 years since no evidence of the killer was found.