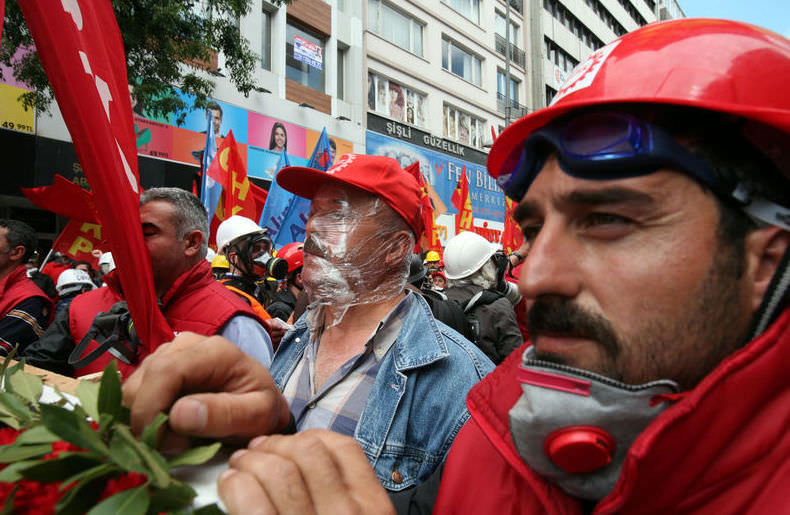 by Tevhid Nazmi Baştürk May 02, 2014 12:00 am
ISTANBUL — In recent years, May Day (Labor Day) has become associated with large-scale protests in Turkey's larger cities as workers' rallies often take a turn for the worse due to the participation of marginal terrorist groups.

This May 1 was no different. Last year, the Turkish government imposed restrictions on rally goers as Taksim Square was made unavailable for the occasion. The pedestrianization of Taksim Square had brought up issues of safety and the fear of anarchist demolition was too great a risk. Thus, chaos ensued when large groups of protestors, egged on by members of the Revolutionary People's Liberation Party-Front (DHKP-C), a terrorist insurgency responsible for last year's bombing of the U.S. embassy in Ankara, and other marginal groups attacked property and police officers with glass bottles, cobblestones from the sidewalk and Molotov cocktails.

This May Day was no different. I was once again appalled by what I witnessed.

In Şişli, I saw many innocent and concerned protestors, expressing their right to free speech; yet unfortunately, I also witnessed blatant acts of vandalism, assault, arson and terrorism. The Labor Day protestors marching toward Taksim were blocked by police officers and the marginal insurgents in their ranks, fully prepared with gasmasks, goggles, hard hats and gloves, made it their duty to physically assault policemen with Molotov cocktails, cobblestones and even fireworks.

On my unfortunate adventure I also came across a Hawaiian man, Tom, who was baffled by what he was experiencing.

Tom had come to Istanbul, a city he described as beautiful, at the behest of his friends only to find himself in the middle of a spectacle he could never imagine witnessing in the U.S. "I thought it was going to be a holiday, one that people would enjoy. I guess it is a little different today," he said. "Unfortunately I have witnessed violent protesting, as well as civil protests."

As I guided Tom away from Şişli Square he told me that he had never witnessed such a thing in all his life.

What shocked this tourist the most was how so many people willingly took to the streets with the intention of causing harm. As we hurried away from what was certainly not a safe area he pointed out that one of the "protestors" that had passed us was wielding two Molotov cocktails, which prompted him to ask me why a person would do such a thing.
Though I was unable to answer his question, Tom made me wonder how many people, tourists or citizens, fall victim to injury due to these acts of terror.

He also made me realize how unacceptable these so-called "protests" really are in comparison to what we see in the
U.S. and other developed countries.