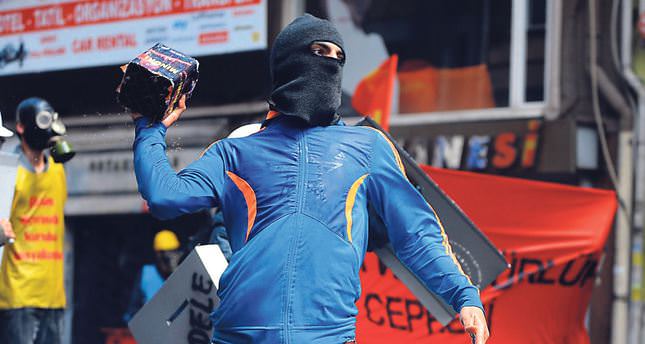 ISTANBUL — Workers gathered for peaceful Labor Day rallies all around the country while life grinds to a halt in Ankara and Istanbul, where demonstrators determined to reach Taksim Square clashed with the police. Members of some anti-American extreme leftist groups, armed with Molotov cocktails, spoiled festivities for the rest.

Defying a ban on observing Labor Day in some city squares, demonstrators clashed with riot police in Istanbul and Ankara yesterday.
Security concerns prompted authorities to prohibit rallies in Istanbul's Taksim Square and Ankara's Kızılay Square but demonstrators including members of anarchist and terrorist groups attempted to march at those locations anyway.

Clashes broke out in the early hours of the morning in central parts of Istanbul's European side such as the districts of Beşiktaş and Şişli, two areas close to Taksim, which demonstrators sought to reach. Taksim is symbolic for labor unions adhering to leftist ideologies. In 1977, 34 people were killed at the square when shots were fired into a crowd by unknown perpetrators at a time in which political turmoil between proponents of left-wing and right-wing movements was at its height in the country.

As demonstrators gathered yesterday at a square in Beşiktaş, loudspeakers on police vehicles blared, urging the crowd to disperse and go to other squares designated for rallies. Not heeding the call, demonstrators continued to convene. Riot police dispersed the crowd with tear gas and water cannons, sending the groups scattering to alleys near the square where they clashed with police.

Mahmut Tanal, a member of Parliament from the opposition Republican People's Party (CHP), was injured during the incidents in Beşiktaş. Tanal sat down in front of an armored police vehicle to prevent it from reaching the demonstrators. Arguing with police officers asking him to leave, Tanal punched one of them and was injured when he was hit back by policemen.

Other CHP lawmakers also joined demonstrators in Istanbul. In Şişli, demonstrators convened outside the offices of a trade union before marching toward Taksim Square. They were stopped by police, who urged them to also go to other squares designated for rallies by the governorate. Some demonstrators in the group started hurling stones at police officers. As they ignored the call and resumed marching, riot police fired tear gas and water cannons at them.

Another group of protesters blocked a highway straddling Mecidiyeköy, a neighborhood in Şişli, but the police dispersed them.
The police arrested 142 people who objected to police's order to disperse near Taksim Square and in Beşiktaş. The governorate said 90 people including 19 police officers were injured in the incidents related to Labor Day rallies and 23 among them were still being treated.
It is reported that about 40,000 police were deployed in Istanbul on the occasion of Labor Day, with many traveling to the city from other provinces across the country. A bomb threat was received by phone regarding a location in Kadıköy on the Asian side, but a police search revealed no device.

Violent clashes paralyzed daily life as well.Public transportation, except for buses, in Istanbul was shut down from morning, forcing commuters to walk under a cloud of tear gas and the imminent threat of stray stones the crowd of demonstrators threw at police and civilian passersby.

Some labor unions led the call for observing the day at Taksim Square despite the government ban. On Wednesday, they issued a joint statement and said, "We will be in Taksim despite the irrational and illegal ban. All roads will lead to Taksim on Labor Day, and our struggle for labor, equality, freedom, justice and peace will continue."

There was a heavy police presence in Taksim and its vicinity. Hundreds of police lined up on the surrounding streets, which were closed to access. Only 200 members of two unions were allowed to enter Taksim Square to lay a wreath commemorating the massacre in 1977.

Prime Minister Recep Tayyip Erdoğan said last week that his government was determined not to lift the ban and told labor unions to "abandon hope" of entering Taksim. The government suggested other sites for rallies, such as Yenikapı, a larger square near Taksim, but the Confederation of Revolutionary Workers' Unions (DİSK) and the Confederation of Public Workers' Unions (KESK), two major trade unions, rejected the suggestion. Only a small group of people from different labor unions observed Labor Day in Yenikapı. The Istanbul Governorate said earlier this week that it would allocate 300 free buses to take people to Yenikapı. The governorate allocated two such sites in the city for rallies.

Labor Day or International Workers' Day, was declared a national holiday in 2009. Events to celebrate the day are often marked with violence, not only in Istanbul but other cities too, with radical and terrorist organizations taking advantage of the mass rallies to stage attacks against security forces. The Istanbul Governorate announced on Wednesday that it had intelligence reports claiming that terrorist organizations would provoke violence against security forces.

In the capital Ankara, a group of demonstrators from various trade unions and radical groups attempted to march to Kızılay, the main square, after gathering at a park. Chanting slogans, the crowd marched to the square despite police warnings, breaking through police barricades and hurling fireworks at riot police. In response, police tear gassed the crowd, which fled into back streets.

Labor Day was observed in other Turkish cities as well but events in those cities were relatively peaceful. In western Turkey's İzmir, members of trade unions marched on the streets and performed folk dances for the occasion. In Sivas in central Turkey, labor unions celebrated the day with halay, a traditional line dance. Demonstrators chanted slogans and carried banners with messages about workers' rights.