Davutoğlu: No one will accept the legitimacy of Syrian presidential elections 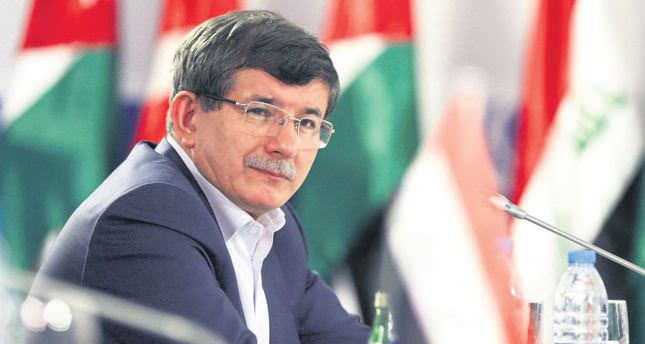 ANKARA — The United Nations needs to set up refugee camps within Syria for those fleeing violence in their country, said Foreign Minister Ahmet Davutoğlu at the third Ministerial Meeting of Syria-Bordering Countries in Jordan yesterday. The foreign minister said 3,700 babies had been born in refugee camps in Turkey, adding that the U.N. and its affiliated organizations should be allowed to regulate refugee flows through a series of camps within Syria in order to relieve the pressure on neighboring countries. "The obstacle here is the Syrian regime but the U.N. Security Council should not wait for this regime to acquiesce to such a strategy," he said. Davutoğlu said Turkey had spent $3 billion on Syrian refugees living inside its borders while the rest international community had contributed
just $150 million for their upkeep.

Davutoğlu said, "Secondly, an increase in attacks with barrel bombs concerns us. Finally, we are concerned about the international stance. Certainly, all crises have significance but the greatest crisis of this century is happening right before our eyes in Syria. We should be more sensitive to this."

Answering the question of what changed after the meeting in Harran, Şanliurfa Davutoğlu said 3,000 Syrian children were born in protection centers within Turkey. "We arrived at the second Geneva conference with great hopes. The conference took place only two days after our meeting in Harran. Unfortunately, it ended with disappointment. The results made the current situation worse. The tension increased due to a lack of diplomatic solution," told Davutoğlu.

He further indicated that if Turkey did not help Syrians, they would die. "Turkey wants refugees to stay in Syria. The principal aim of the international community is to protect the protection centers within the borders of Syria.

However, the most important barrier is the current regime. The U.N. Security Council hasn't executed anything and has thrown people at the mercy of the regime," he added.

Before his arrival in Jordan, Davutoğlu gave an interview to Sabah newspaper. "Recent developments in Ukraine have significant impacts on the Syrian issue. The West is on alert behind the scenes. The fact that the international community remains silent on the Syrian issue supports its impact on Ukraine," he added.

Davutoğlu stated that no one will accept the legitimacy of Syrian presidential elections. "Syria renounced the transitional government proposed during peace talks in Geneva with the upcoming election. This is because we need to adopt a new strategy and attitude," said Davutoğlu.

He stated that some important developments were expected in the following days. The foreign minister said, "The core group of the Friends of Syria is planning to meet with 11 countries."

Davutoğlu had bilateral talks with U.S. Secretary General John Kerry and Saudi Arabia and Qatari foreign ministers two weeks ago. Turkey will also participate in the Friends of Syria's meeting as one of the core group members in the coming weeks.

Imagine how many people would still be alive if Turkey had not accepted 800,000 refugees," he said.During the second round of the Geneva peace talks, Syrian Foreign Minister Walid Muallem accused Turkey of aiding terrorists. Davutoğlu gave a harsh response by saying: "Yes, there are 700,000 terrorists in Turkey. We also have 40,000 baby terrorists who can kill you at any moment.

There are even hundreds of female terrorists who have lost their husbands. This is the humanitarian aspect of the issue, and you cannot do politics without any humanitarian perspective." He further highlighted that Syria forgets what Assad's regime has done. They treat Turkey as an enemy and show Assad's regime as legitimate. There are currently 3.5 million refugees. The number will reach 4-4.5 million by the end of this year. "When a report on Syria is prepared in the future, there will be a blacklist including those who do not tackle the issue from a humanitarian perspective. We cannot transfer such shame to future generations," said Davutoğlu.

Meanwhile, at the third Ministerial Meeting of Syria Neighboring Countries U.N. High Commissioner for Refugees Guterres said: "These countries (Egypt, Jordan, Iraq, Lebanon and Turkey) received about 3 million registered and unregistered Syrian refugees... The truth is that this enormous impact is not being fully recognized by the international community." "Let me be very clear, there has been very little support," he said at northern Jordan's Zaatari refugee camp, which is home to more than 100,000 Syrians.

He added: "There must be massive support from the international community at the level of government budgets and development projects related to education, health, water and infrastructure." "It's necessary that countries around the world, not only countries of the region, keep their borders open to Syrian refugees and facilitate access to their territories with a more open policy and global responsibility," Guterres told reporters.

He added: "Support needs to massively increase in the months to come. The problem is not only humanitarian. It has become structural for the economies and societies of host countries."
RELATED TOPICS