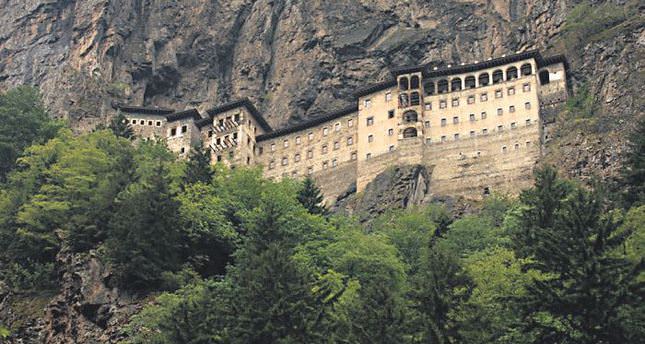 With its unique structure nestled in a forest, the Sümela Monastery situated in Trabzon is a top tourist destination that expects to attract 500,000 visitors this year

ISTANBUL — At an altitude of approximately 1,300 meters and located 40 kilometers from the city center, the monastery is constructed on the ledge of a steep cliff on the slopes of Karadağ (Black Mountain) overlooking the Altındere Valley in the district of Maçka. Abdil Celil Öz, the governor of Trabzon, highlighted the importance of the Sümela Monastery and the picturesque Lake Uzungöl for local tourism. The Governorate of Trabzon is making significant contributions to the promotion of annual religious ceremonies that started again in 2010 after an 88-yearbreak.

"The number of tourists visiting the Sümela Monastery is increasing. The Black Sea Region will be busier with tourists when we harvest the benefits of natural, historical, cultural values. We are carrying out a series of tourism activities," said Öz.

They will be available for both local and foreign visitors in the near future," he said.

Trabzon is a significant attraction in Black Sea coast tourism. There were 2.71 million visitors to Trabzon last year. Of this total, 635,000 were foreign tourists. In 2012, the number of tourists reached 2.5 million.

Moreover, 400,000 people visited the monastery in 2013 with a 10 percent increase compared to the previous year. Students flock to the Sümela Monastery in spring when the place is covered in different shades of green. Many university students do not return home without first visiting the Orthodox monastery. They are welcomed with traditional music performed playing the kemençe, a string-bowed musical instrument.

Visitors can also take photos during their visits and have a taste of cuisine unique to Trabzon.