Dialogue of Civilizations symposium gets underway 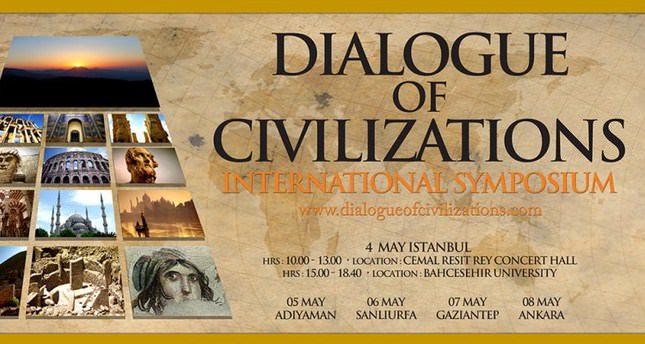 by Daily Sabah May 06, 2014 12:00 am
ISTANBUL — The "Dialogue of Civilizations International Symposium" opened in Istanbul on Sunday. The six-day event brings together academics from various countries who will discuss the development of civilizations and their connections.

The event is jointly organized by the Turkish Ministry of Culture and Tourism, the Civilization Studies Center, the National Geographic Society, the Istanbul Metropolitan Municipality, Bahçeşehir University, the Turkish Historical Society, Bilkent University and the Alliance of Civilizations Institute.

The event opened on Sunday at Cemal Reşit Rey concert hall in Istanbul and continued yesterday in Adıyaman, a southeastern city which has been a central part of the Kingdom of Commagene that built mysterious statues at Mount Nemrut located near the present-day city. The next sessions will be held in the southeastern cities of Şanlıurfa and Gaziantep, as well as in the capital Ankara. The event will conclude with a final declaration in Istanbul on May 9.

Along with discussions on history, the event will focus on ties between different civilizations, co-habitation of cultures and bonding of cultures through the history of education.

The first edition of the international event was held in Guatemala, which hosted the ancient Mayan civilization.

Among the speakers are professor Bekir Karlığa, a scholar of Islamic philosophy who also chairs the National Coordination Committee for Turkey in the Alliance of Civilizations, Turkey's Vatican Ambassador Kenan Gürsoy, professor Ralph H. Salmi from California State University, professor Anne P. Underhill from Yale University and professor Klaus Schmidt from the German Institute of Archeology.
The event is a part of The Alliance of Civilizations initiative co-founded by Turkey and Spain in 2005. The initiative is shaped as a platform to encourage improved ties between Muslim countries and the West through developing a mutual understanding based on interaction of civilizations. It also aims to curb extremism and provide incentives for intercultural dialogue through projects mostly focused on the youth.