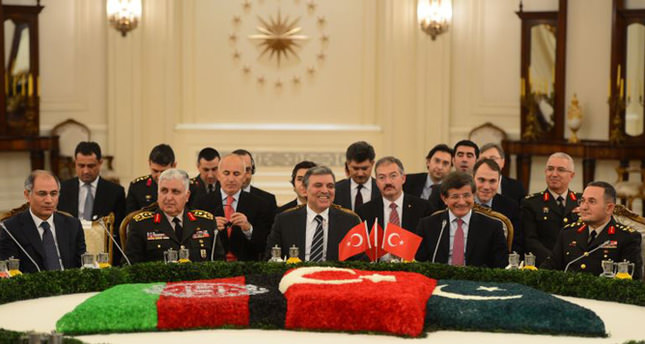 by AA May 06, 2014 12:00 am
TBILISI, Georgia — Regional disputes should be solved with an understanding of full respect to territorial integrity, Turkish President Abdullah Gül said, emphasizing that Turkey always supports the integrity of its south Caucasian allies; Georgia and Azerbaijan.

In a press meeting after talks with his Georgian and Azerbaijani counterparts, Gül said the crisis in Ukraine was discussed and it affects all three countries.

"We hope that constitutional reform would be positive for all the regions in Ukraine," Gül said, also noting that Turkey is following the situation of Crimean Tatars in the country.

Georgia's President Giorgi Margvelashvili said, "Tens of millions of people will enjoy the fruit of this summit."

Meanwhile, Azerbaijani President Ilham Aliyev said the rail link project (started in 2007) - connecting Turkey, Georgia and Azerbaijan - expected to be completed in mid-2015 has enhanced cooperation between the three countries.

Aliyev also talked about the importance of Transanadolu Pipline (TANAP) project, which will carry Azerbaijani natural gas to Europe and Trans Adriatic Pipeline TAP, which is to carry natural gas from Azerbaijan's Shahdeniz field.

"The talks we are having have great importance for Europe. This will be our contribution of energy security to the continent," Aliyev said.

Energy-dependent Europe is one of the largest energy importers with limited energy resources. It has devised an energy policy in 2008 for the Southern Gas Corridor, which aims to carry gas from the Caspian and Middle Eastern regions to Europe.

Some of the key partner countries for the corridor include Azerbaijan, Turkey, Georgia, Turkmenistan with the possibility of Iran joining if political conditions permit. The vital component of the corridor is the Trans Adriatic Pipeline, TAP, which is to carry natural gas from Azerbaijan's Shahdeniz field, starting from Greece via Albania and the Adriatic Sea to Italy and further to Western Europe.