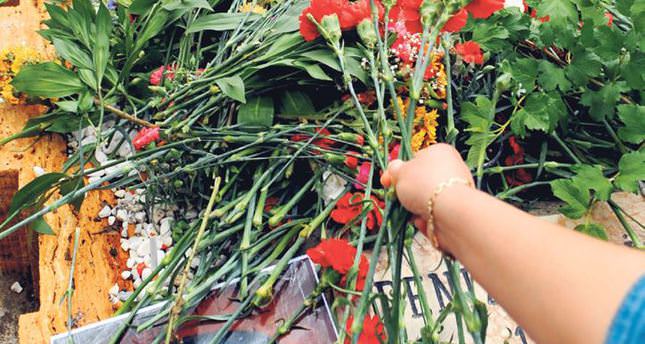 by Daily Sabah May 07, 2014 12:00 am
IZMIR — A series of ceremonies were held in Turkey yesterday to commemorate the deaths of Deniz Gezmiş, Hüseyin İnan and Yusuf Arslan, three left-wing activists executed on May 6, 1972 for attempting to overthrow the government.

People gathered at monuments erected in the western cities of İzmir and Bursa at 5:30 a.m., the time Gezmiş and the two others were hanged. They left carnations at the monuments in memory of the three activists as Concierto de Aranjuez, a guitar concerto, was played. Gezmiş had reportedly asked to listen to the concerto as his last request before being hanged. The three were members of the '68 Movement named after the year Gezmiş, a prominent activist, founded the Revolutionary Jurists Organization. Members of the opposition Republican People's Party (CHP) and Turkish citizens attended the remembrance ceremonies.

Deniz Gezmiş, the most prominent of the three young activists, was born in 1947 and took to Marxist-Leninist ideology while studying law at Istanbul University in the 1960s. He led the occupation of the university in 1968, demanding "a democratic university." He later headed protests against the United States' Sixth Fleet anchored at an Istanbul port in 1968. That same year, he was arrested for protests and spent three months in detention. He was arrested several times for protests and clashes with rightwing activists and became a prominent student activist.

In 1969, Gezmiş traveled to Jordan where the Palestine Liberation Organization (PLO) had set up camps to train insurgents against Israel. After a brief training there, he returned to Turkey and in 1970 founded the People's Liberation Army of Turkey (THKO), an armed underground faction he created with fellow activists to carry out "armed struggle for independence and democracy."

In 1971, he took part in a bank robbery in the capital Ankara and the kidnapping of four U.S. soldiers. Gezmiş, Yusuf Arslan and Hüseyin İnan, who were involved in the kidnapping, were captured in different cities after they released the hostages. After a trial on charges of attempting to "overthrow constitutional order," the Parliament and the president approved death sentences for the trio and they were executed by hanging in an Ankara prison.

The executions were the work of a government appointed by the Turkish army following a military coup on March 12, 1971.

They were the culmination of a series of arrests of right-wing and left-wing activists and suppression of the opposition to the coup.