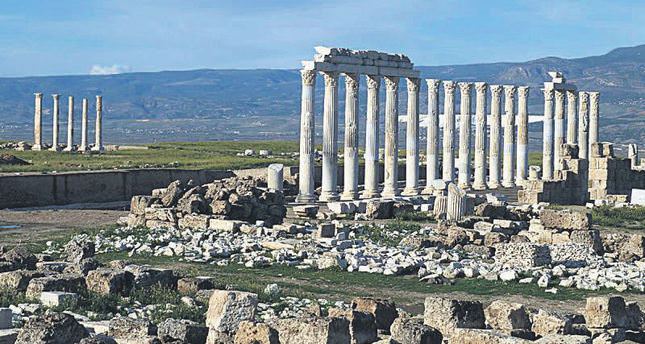 Laodicea, an archaeological site located in the Turkish village of Eskihisar, revealed one of its long-kept secrets

DENIZLI — Undiscovered for almost 1,500 years, a monumental columned portico was found during the excavations in the biblical city, Laodicea.

According to the Ministry of Culture and Tourism, restoration work on structures as the site including the Church of Laodicea, Temple A, the North (Sacred) Agora, the South and East bath complexes and the monumental fountain of Septimius Severus have been carried out under the supervision of Professor Celal Şimşek since 2003.

Laodicea suffered from a massive earthquake in 494. The quake destroyed the 10.80 meter-long columns at the site which remained seven meters underground for more than a century. The columns will be restored once excavation work is completed.
The Hellenistic city of Laodicea was founded by the Seleucid king Antiochus II in the name of his wife Laodicea around the middle of the third century. It is home to one of the seven Asian churches mentioned in the Bible and was held in high esteem in the course of the Roman and Byzantine Empires.

Laodicea was rebuilt numerous times due to the successive earthquakes.

Its residents left the region after an earthquake in the first quarter of the seventh century. It was later named "Ladik" after the town was taken over by the Turks in the 13th century.