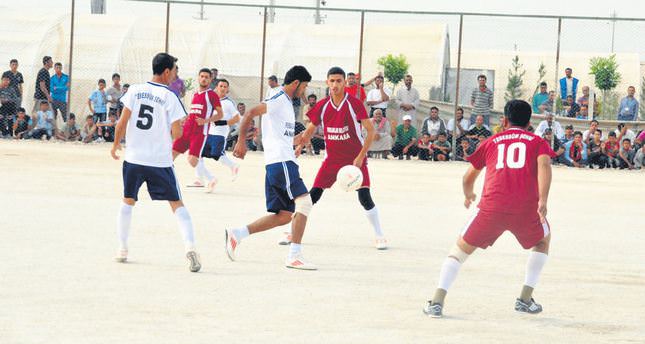 by AA May 09, 2014 12:00 am
SANLIURFA — Local Turkish officials held a football tournament at a refugee camp housing 25,000 people in the province of Şanlıurfa where young Syrians formed 20 teams. The final, which was decided on a penalty shootout, was watched by local officials and Syrian National Council members. Young Syrians at a refugee camp in the southeastern Turkish province of Şanlıurfa took part yesterday in a 20-team football tournament organized by local officials.

The final match, which required a penalty shootout when it ended in a 1-1 draw, drew in local officials and representatives of the Syrian opposition's National Council.

Eyüp Fırat, the district governor of Akçakale, where the refugee camp is located, said this was the third tournament of its kind, adding that they had organized a series of events to boost morale of Syrians staying at the camp. "We are glad to see how happy our brothers staying here are.

It also strengthened our bonds. As Syrian spectators cheered here, we heard them shouting the names of Turkish officials who helped organize the event. This shows how warm our ties with people here are.

Our Syrian brothers overcame difficulties and we now see how joyous they are. We hope to do more to help them forget their troubles,"
Fırat said.

Over 25,000 Syrian refugees stay at the camp in Akçakale which borders Syria.

Turkey hosts over 200,000 refugees in 21 refugee camps including "container cities" where refugees stay in containers converted to small houses. Most of them are located in areas along the Turkish-Syrian border.
Last Update: May 09, 2014 1:56 am
RELATED TOPICS