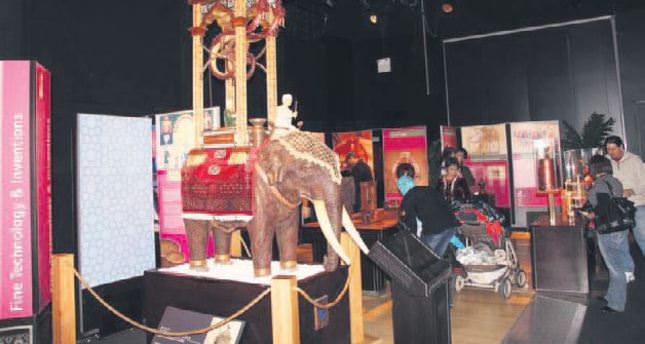 by Daily Sabah May 10, 2014 12:00 am
KONYA — While Europe lingered in the gloom of the Dark Ages, the streets of Islamic cities were illuminated with kerosene street lights.
The "Sultans of Science" exhibition highlights the importance of scientific and technological advances made during the Golden Age of Islam between the seventh and 17th centuries. It also draws attention to the multi-cultural roots of modern science and technology.

Presented with the motto "1000 Years of Knowledge Rediscovered," the exhibition displays a wide range of works and inventions by Islamic scholars whose names have gone down in the history of science, including Avicenna, al-Biruni, Ibn Khaldun and Piri Reis. The controlled flight system of Abbas Ibn Firnas invented back in the ninth century and Al Zahrawi's operation tools are among some of the inventions displayed in the exhibition.

Visitors will have the opportunity to travel back in time to the Golden Age of Islamic science when Islamic mathematicians in ancient desert cities were busy defining the theory of vision, developing trigonometry, discovering the principles of flight and using advanced town planning and architecture to design their cities. The doctors of this era discovered pulmonary heart circulation, undertook operations with surgical instruments very similar to modern surgical instruments and established efficient public hospitals.

Astronomers of the time observed the heavens, developed astronomical tools to calculate their position on earth and paved the way for satellites and travel in space, while engineers such as Al-Jazari and the Banu Musa brothers laid the foundations of modern engineering and developed ingenious devices such as the first robot.

Since its inauguration in Dubai, the "Sultans of Science" exhibition has been showcased at the MTN Science Center in Cape Town, South Africa, the Liberty Science Center in New Jersey, U.S., and the TELUS World of Science in Edmonton, Canada. "We are delighted to host Sultans of Science and encourage visitors to explore and celebrate the achievements of scholars during the Golden Age of Islam and also learn how the different areas of the exhibition subjects in that era have influenced modern science and technology," said Ali Çetinkaya, CEO of Konya Science Center.

MTE Studios, specializing in themed architecture and edutainment, created the project to inform future generations of how science was shaped a thousand years ago.

The firm designs prototypes and manufactures inspiring interactive exhibits for science centers, museums, shopping malls and corporate environments. It has also played a major role in the design, manufacture and installation of numerous interactive exhibits at the Topkapı Palace in Istanbul. Other major projects of the studios include designing the magnificent Ibn Battuta Mall and working on the Dubailand development.

The Sultans of Science exhibition will travel to different parts of the country under the banner of Tübitak after being showcased in Konya.