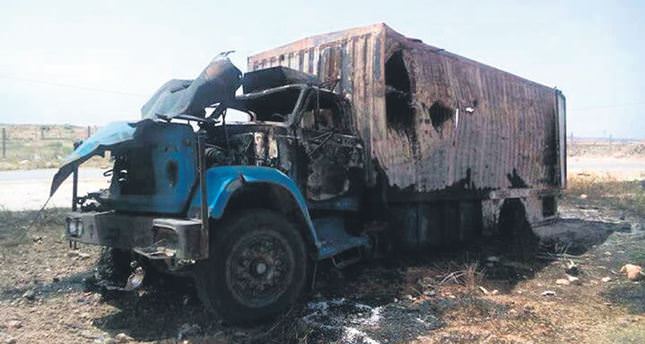 by Raide Oral May 10, 2014 12:00 am
ISTANBUL — A truck belonging to the Human Rights and Freedoms humanitarian aid foundation carrying aid to the needy in Syria was targeted by fighter jets of the Assad regime on Friday. The IHH said the attack near Aleppo killed one Syrian and injured two others.

Turkish NGO IHH's aid truck was attacked by Syrian forces near the northwestern Syrian city of Aleppo late Thursday. One person died and two others were injured.

According to a statement made by the Humanitarian Relief Foundation (IHH), the trucks were carrying flour packages and blankets from the southern Turkish province of Hatay's Reyhanlı district to the NGO's warehouse in Aleppo. The NGO stated that the truck was hit by Syrian jets. The assault took place on the Castillo Boulevard near Aleppo.

Speaking to Daily Sabah, IHH's deputy chairman, Hüseyin Oruç said: "Since the beginning of the war in Syria we have sent about 4,000 aid trucks to Syria, we are sending the aid to the provinces and towns that are under arms embargoes. The massacres by the regime have been continuing in Syria, everyone in the country is under the threat because the regime is killing everyone."

He added: "We have sent two aid trucks, they were targeted by Syrian jets, one of the trucks was targeted by the jets, the truck's Syrian driver became a martyr during the attack while two others were wounded, one of the wounded is in a critical condition.

"The wounded are being treated in a hospital in Aleppo. The regime is killing and attacking everything even aid trucks, this attack shows us one more time the country is in a very bad condition.

President of IHH Humanitarian Relief Foundation, Bülent Yıldırım also confirmed the incident saying: "Our truck, which was carrying flour packages and blankets, was hit by regime jets, one Syrian was killed while two others wounded. As you see al-Assad's forces have been attacking aid packages for women and children. We are very sad for this bad event."

He also claimed that al-Assad's forces had been using about 100-150 barrel bombs in Aleppo almost every day. Yıldırım said: "Women and children are being killed in the streets of Syria." The IHH was established in Turkey in 1995 as a humanitarian aid organization, it is known for its role in aiding Syrian refugees and citizens since the beginning of the Syrian crisis in 2011.