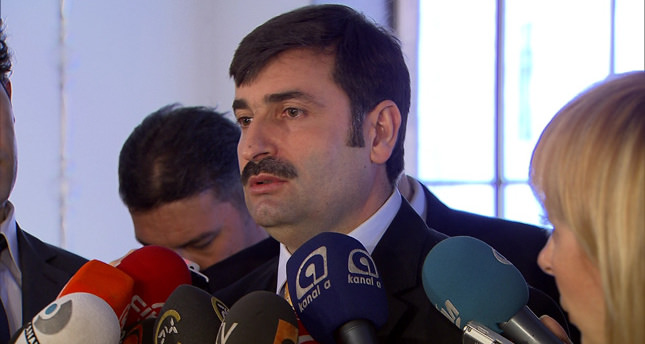 by AA
May 10, 2014 12:00 am
ANKARA — The Turkish Parliament's Human Rights Investigation Committee will be in Italy next week to observe the condition of prisons and Turkish prisoners being kept in the country. The committee, led by AK Party lawmaker Ayhan Sefer Üstün, will be in Italy from May 13 to 16 where it will make visits and hold talks with Italian officials.

Üstün said the delegation would visit the Italian Senate and hold talks with members of their committee's Italian counterpart. "We will also visit two large prison complexes and meet Turkish convicts there. We will hear their problems, if there are any, and also examine the penal system in Italy," he said.

We will discuss the issue with Italian migration officials and check out whether we can benefit from their practices related to the handling of illegal immigrants," he stated.

Üstün said they would exchange views on prisons, penal systems and migration with Italian officials and share Turkey's experience on those matters. "We may adopt their system or can offer our friendly advice. Turkey is successful particularly in terms of handling migration, and embraces immigrants from Syria, Central Asia and Africa. I have recently spoken to the representatives of Afghan immigrants and they told me there were 27,000 Afghan refugees in Turkey.

Though we mention Syria while speaking about migration, we have a large number of people coming to Turkey from other countries and Turkey's migration policy and services are far more advanced than those of Europe," he said.

We should be able to talk about these things happening in friendly countries. We should be on the same level when it comes to speaking out about these issues," he said. "It has been the representatives of other countries who warned us about violations all this time but we need to defend the rights of oppressed people in those countries as well." The committee chairman also noted that Turkey always welcomes delegations from abroad that desire to monitor state institutions in Turkey. "Over 55 delegations from various countries applied to our committee to examine human rights issues in Turkey in the past two years," he stated.