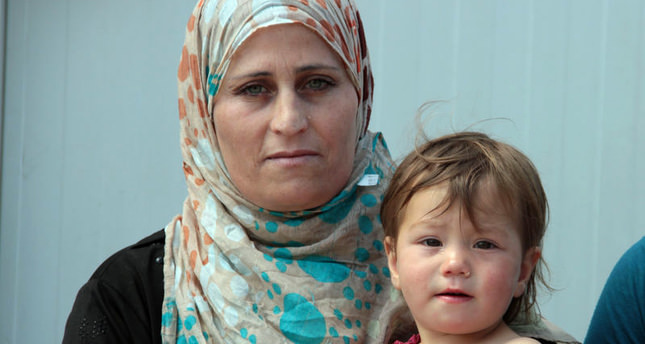 by AA May 11, 2014 12:00 am
ŞANLIURFA — Mother's Day is a special celebration of women who raise children, but for the Syrian refugee mothers in Turkey, it's a bittersweet time because of the ongoing civil war in their country.

Women and children are the ones most affected by the Syrian civil war. Many Syrian mothers have lost their homes, friends, relatives and even their children during the three-year conflict.

But despite strong grief, women have never lost their hope in life or forgotten their motherhood for the sake of their children. Syrian mothers look forward to the day they return to their homes after the end of the war.

Syrian refugee Dilap Mukri told (AA) that she came to Turkey with her husband and 10 children after their home was destroyed by an air attack and that her son passed away during a clash. She lives at a refugee camp in the southeastern Akçakale district of Turkey's Şanlıurfa province.

Mukri's relatives are still in Syria saying, "I miss my mom everyday, but there are certain days – like eid, sacrifice feast and Mother's Day – when her absence is felt more strongly."

Fatma Ganip is another resident of a refugee camp in Turkey who lost her 23-year-old son in the civil war. "For us, Mother's Day is no different from the other days and we were torn out by the civil war" she said.

There are also other cities in Turkey hosting Syrian refugee families who do not live in the camps.

Syrian mother Feride Harbutli and her six children arrived at the dilapidated basement building where they have been staying in Istanbul for the last year and a half. "We had work, we had a big home," she said.

"Two weeks ago my daughter's husband died in the war and I cannot feel good about Mother's Day because my older daughter is still in Syria," Harbutli said about Mothers' Day.

In March, as the civil war in Syria entered its fourth year, 76 percent of the current 2.3 million Syrian refugees fleeing "a horrific and tragic situation" in the country are women and children, according to U.N. Refugee Agency.