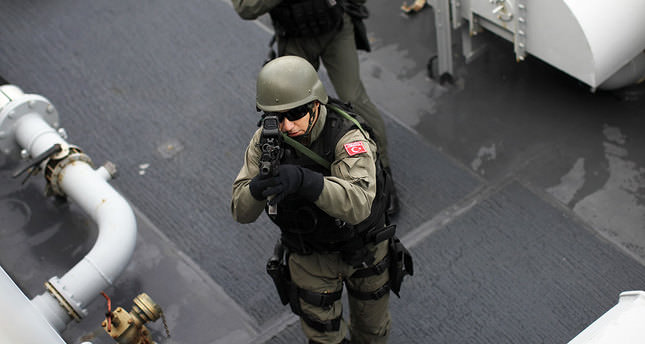 by AA May 11, 2014 12:00 am
CAPE TOWN, South Africa — The Turkish Forces fleet, Barbaros, which is part of Turkish Maritime Task, has provided training for African countries' armies in Cape Town.

Turkish Maritime Army aims to strengthen bilateral relations with African countries and seeks to establish new relations. It includes two frigates, a corvette and a replenishment tanker and will carry out training and visit ports in African countries until the end of June.

The army, which carries out training and humanitarian activities in Africa, passed by the Cape of Good Hope – for the first time in 148 years on Friday.

Turkish Naval Commandos (SAT), which consists of officers and non-commissioned officers, was tested on a voluntary basis and took a 52-week course.

The Turkish navy last crossed the Cape of Good Hope 148 years ago with two Ottoman corvettes, which were in charge of guarding Ottoman pilgrims. Since then, the Suez Canal has been the preferred route.