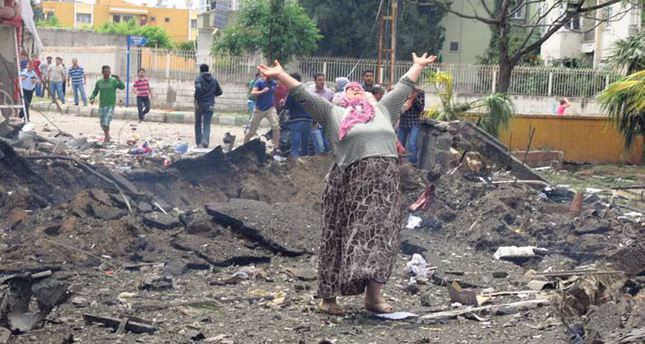 by Anadolu Agency May 12, 2014 12:00 am
REYHANLI, Hatay — On the first anniversary of twin bombings that ripped through Reyhanlı, a town in the southern Turkish province of Hatay along the Turkish-Syrian border, an air of sorrow has engulfed tearful residents as they wait for the trial of the bombing suspects.

Reyhanlı, a town of about 88,000 people, sits on Turkey's southern border with Syria. Since the conflict erupted in Syria three years ago, thousands of Syrians flocked to the town through the Cilvegözü border crossing, seeking refuge from the violent clashes between rebels and the regime forces. The town embraced desperate Syrians, accommodating them at their homes and offering aid. Little they knew that the violence in their neighbor would spill over into this border town though some residents claimed there have been rumors circulating that the "bombs will explode sooner or later."

It was Mothers' Day and the town's center was busy with people shopping for gifts when a car bomb exploded in front of the town hall, at 13:37 p.m. A state of panic and fear ensued as people tried to grasp what happened but it was not over. Three minutes later, another car bomb went off near the post office in a central part of the town. With news traveling fast, people with relatives in the blast sites rushed to look for them as the sound of ambulance sirens pierced the air but hopes dimmed fast as they saw the scale of devastation firsthand. The powerful blasts demolished over 900 residences, 891 stores and 148 vehicles.

Döne Kuvvet, an elderly woman, became a symbol of grief for Reyhanlı victims when a photo showing her with her hands stretched to the sky in sorrow while standing in a crater the blast created made the headlines. Kuvvet's daughter and granddaughter were killed in the deadly blasts. Nadire was living with her mother after a divorce and was near the town hall with Fatmanur, the young daughter of her sister after the three-year-old girl insisted to accompany her aunt. "I still feel the same pain," Döne Kuvvet said. "It devastated us, it was a doomsday for us. I hope no one will go through what we suffered from. It is very difficult to recover but it is fate after all," she said.

Hamit Kaya lost his son Mustafa, 23 in the bombings. Mustafa Kaya was out to meet his friends when he was killed in the explosion. "I lost him but I did not give way to the pain. He was studying for university entrance exams and he had dreams about the future. I never felt anger toward Syrians. My son became a martyr and that is my consolation. I am proud of him because they gave his name to a street here," Hamit Kaya told Anadolu Agency.

Like Mustafa Kaya, names of other victims now adorn the streets of the town. Oğulcan Tunas (16) name was given to the high school he attended. He was killed when the first car bomb exploded as he was entering the prep school he attended on the weekends. Tuna's family turned the young man's room to a shrine with his photographs, awards he won in various competitions and with his clothes and bed kept intact. "We remember May 11 with pain," Ahmet Tuna, his father, said. Like families of some other victims, the Tuna family accepts the death as "fate." The father believes the attacks aimed to sow discord among Sunnis, a majority in Reyhanlı, and Alevis who shares a similar faith with Alawites of Syria. Visiting Reyhanlı after the attacks, Prime Minister Recep Tayyip Erdoğan has said the attacks should not lead to hostility against Syrian refugees and urged Reyhanlı residents not to fall victim to provocations to that extent.

Oğulcan's mother Fatma Tuna shed tears by the bedside of her son and uttered her sorrow on the first Mothers' Day without her son.

Kübra Erboz lost her one-and-a-half-years-old daughter in the blast. "Today is Mothers' Day but I feel nothing. It is a day of mourning for me," she says. Although families accepted victims' "fate," they have not given up seeking for justice. Hatice Can, a lawyer for Oğulcan
Tuna's family, has complained of the process under which the trial has taken place. She told Anadolu Agency the case was referred to a court in Adana by the court in Hatay after Turkey abolished specially-authorized courts handling terror-related trials. Can said the next hearing will be held in Hatay on May 26 but the court referred the case to the Adana court with a ruling "that has no legal basis." She added that the abolition of specially-authorized courts should not affect the trial and the trial should be handled by the Hatay court as it was scheduled.

The amendments to laws regarding the abolition of specially-authorized courts allow cases handled by abolished courts to be referred to criminal courts in the same province while it is not known why the case was transferred to a court in another province. The first hearing was held in Adana's specially-authorized court on Feb. 10, 2014 and the court allegedly did not inform the plaintiffs and defendants about its referral. The ruling is subject to an appeal.

Following the bombings, 26 people including Syrian nationals were arrested on charges of carrying out the attacks while 7 suspects remain at large. The indictment claims the perpetrators are linked to El-Mukhabarat, the intelligence service of the Syrian regime and the terrorist organization Turkey's People's Liberation Party-Front (THKPC).

Mihraç Ural, the leader of THKP-C, is accused of masterminding the attacks. He remains at large. Life is back to normal in Reyhanlı one year after the bombings. The rubble was cleared a long time ago and new buildings were erected in place of the demolished ones. A monument was built in memory of victims and businesses that suffered financial losses in the attacks were subsidized. Nevertheless, the trauma of the devastating attacks will likely continue haunting the residents into the future.