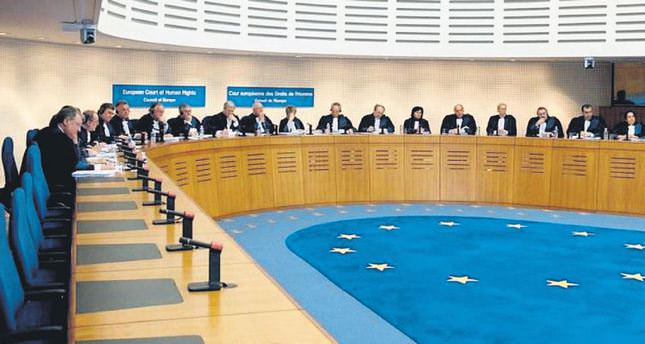 by Daily Sabah May 13, 2014 12:00 am
Strasbourg, France — The European Court of Human Rights (ECHR) ordered Turkey yesterday to pay 90 million euros (TL 257.9 million) to the Republic of Cyprus, a country Turkey does not recognize officially, for the 1974 incursion into the island divided between the Turkish Cypriots and Greek Cypriots. The lawsuit was filed by Greek Cypriots in 1994 and concluded by the court that handles international human rights violation cases.

Commenting on the ruling, Turkish Foreign Minister Ahmet Davutoğlu said the decision was not binding on Turkey and added that no compensation would be paid. He stated that the timing of verdict in this "old case" would hurt the reconciliation talks between Turkish and Greek Cypriots which recently gained momentum.

Greek Cypriots, then not an internationally- recognized entity, claimed Turkey violated human rights during and after the incursion that Turkey describes as the "Cyprus Peace Operation." The Greek Cypriot administration has claimed 1,491 Greek Cypriots went missing and 211,000 people were displaced due to the operation. ECHR found Turkey guilty of a number of violations against Greek Cypriots in 2011 but a ruling on the amount of compensation was delayed.

Turkish troops landed on the island in 1974 in response to a coup on the island supported by Greece's coup regime. The coup brought Nikos Sampson to power, a politician advocating the island's annexation to Greece.

Acting to protect Turkish Cypriots concentrated in the northern side of the Mediterranean island and in line with a past treaty of guarantee that protects the independence and safety of Turkish Cypriots, the Turkish army occupied a small part of the island before a ceasefire ended the conflict. The operation ended up with the emergence of a de facto Turkish Cypriot state on the island that is not recognized internationally while the Greek Cypriot-dominated southern part established the Republic of Cyprus, a member of the European Union and an internationally recognized state.
RELATED TOPICS