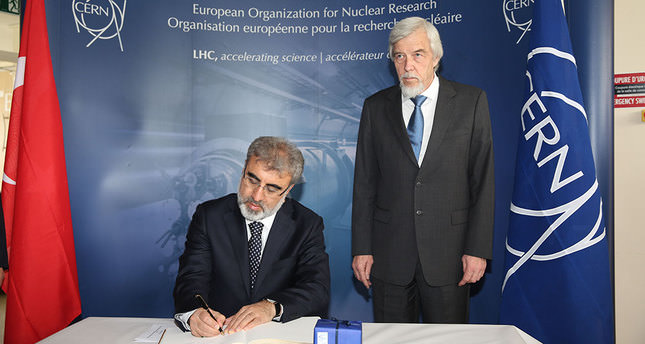 by AA May 13, 2014 12:00 am
GENEVA — Turkey has officially been admitted to CERN, the European Organization for Nuclear Research, as an associate member.

Yıldız said "This is a very special moment for Turkey and Turkish scientific community", adding it "reflects decades of achievement where Turkish scientists have contributed to the European scientific efforts at CERN."

"The Turkish scientific community has a long and proud history of involvement with CERN's programmes stretching back over 40 years," said Professor Heuer.

However, the membership agreement still has to be approved by the Turkish Parliament for it to become effective and this will most likely be within the next two years.

CERN is a European research organization whose purpose is to probe the fundamental structures of the universe.

Turkey's Associate Membership will strengthen the partnership between CERN and the Turkish scientific community and will allow Turkish industry to bid for CERN contracts.