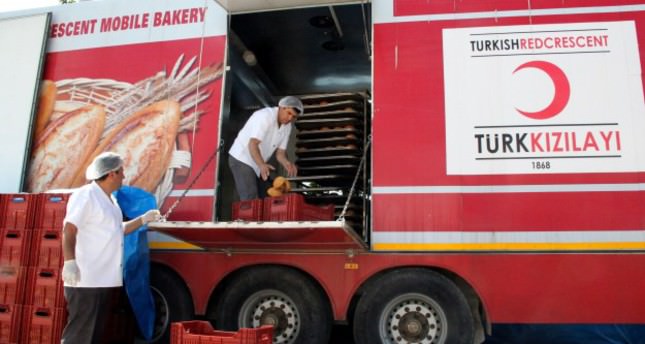 by AA May 13, 2014 12:00 am
HATAY — A mobile bakery constructed in the Hatay province of Turkey by Turkish humanitarian organization Red Crescent has started producing bread for Syrians, as many bakeries in Syria are unable to function due to bombs and fuel shortage.

While the Syrian civil war has now been raging for more than three years, Turkish relief organizations and philanthropists are helping Syrians.

As well as offering assistance to Syrian refugees within Turkey, Red Crescent has established a mobile bakery to meet the needs of the internally displaced refugees, living within Syria's border.

Ilhami Dirk, a member of Red Crescent's Yayladag office told an AA correspondent that the mobile bakery was constructed with the support of Yayladag's District Governorship to meet the demands of Syrians.

5,000 loaves of bread are being produced every day

Dirk said that there is six staff working in the mobile bakery, and that 5,000 loaves of bread are being produced every day in the bakery, while philanthropists keep sending flour.

Every step in producing bread - from preparing the dough to baking it - is done in the mobile bakery. "Now we are doing 5,000 loaves of bread a day, but if Syrians demands more, we can make 10,000 loaves."

Dirk said that the breads are put in packing cases and loaded onto vehicles to be sent across the Syrian border.

Meanwhile, Muhammed Komurcu of the Syrian Turkmen Association, who is responsible for the distribution of aid given by the Red Crescent, stated that almost for three years they have met demands of the bakeries located in villages.

Komurcu added that they had requested Turkish Red Crescent to produce bread, since the bakeries in the area were unable to carry out their duties due to intense bombardment and fuel shortages. Komurcu thanked the Turkish humanitarian organization and philanthropists for their efforts.