Egyptıans in Turkey on hunger strike 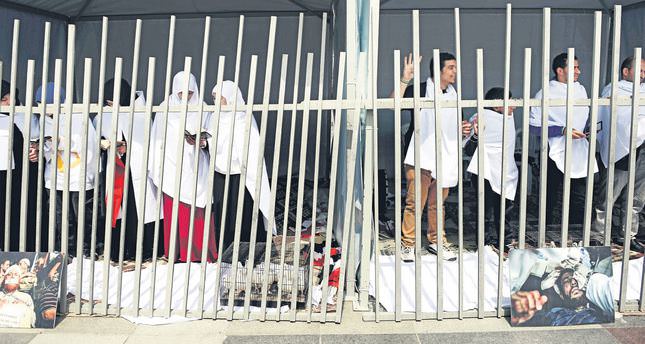 by AA May 14, 2014 12:00 am
ISTANBUL — A group of 20 young Egyptians launched a two-day hunger strike in Istanbul yesterday in a bid to raise awareness over death sentences recently handed down to hundreds of supporters of ousted President Mohamed Morsi in Egypt.

An Egyptian court issued death sentences to 683 people on April 28, following a previous ruling by the same court in March sentencing 528 people to death.

A number of Turkish NGOs, including Humanitarian Relief Organization (İHH), are participating in the hunger strike. Egyptian activists will stay in a two-room tent behind symbolic wooden jail bars. A theatrical gallows has been placed in front of the tents, where a few Egyptian protesters will stand still, with nooses around their necks. Photos of Egyptian Muslim Brotherhood supporters are also on display around the tents and one placard reads "Democracy for the World, Hypocrisy for Egypt."

About 23,000 people have been jailed in Egypt, including more than 1,200 children and over 700 women, since the deadly crackdown over pro-Morsi protesters began last year. Thirty- seven prisoners have died in Egyptian prisons and some of the prisoners have been on hunger strike for over 100 days, according to the press release from İHH.

Twenty-three-year-old Egyptian Amina Amr, who has been living in Turkey for eight months as a student, said her father, uncle and cousins are imprisoned in Egypt. "My uncle was hospitalized in the prison and we are not able to get him out, just because Sisi wants it that way," she said.

A Turkish journalist, Nihal Bengisu Karaca, called for people to speak out against injustice and iniquity, while accusing the West of not calling the ousting a coup because of its economic interests in Egypt.

Hakan Albayrak, another journalist, criticized the United Arab Emirates and Saudi Arabia for backing and financing the Egyptian regime. Albayrak said the only way to prevent further prosecutions in Egypt is to convince those countries to change their policies toward Egypt. "I call on the Saudi and Emirati people to raise their voice against their own governments, as people have been killed with their financial support," said Albayrak.

Turkey is one of the harshest critics of the military coup in Egypt while "world powers have remained silent," argued Turkey's Deputy Prime Minister Bülent Arınç in his statement following the death sentences.elected president, Mohamed Morsi.
RELATED TOPICS