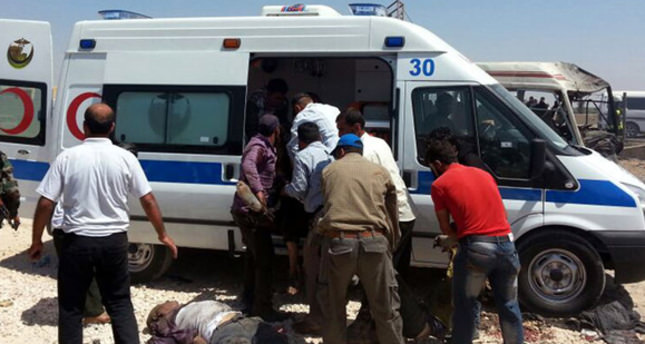 by Anadolu Agency May 15, 2014 12:00 am
ALEPPO — A bomb-laden vehicle exploded in the Azez district of Aleppo, Syria, near to Syria's Es-Selam Border Gate on Turkey's border on Thursday, several casualties reported.

The bomb went off in a garage near the border gate, said a statement from the opposition Syrian Revolution General Commission (SRGC).

The Syrian Observatory for Human Rights said the dead included five women and three children.
Pictures sent by activists showed burnt cars and charred corpses and body parts in the area. They said scores of people were wounded in the explosion.

"At least 12 ambulances have transported wounded people into Turkey, the death toll is very high," one activist in the area said.

No groups fighting in the restive Mid-east country have yet claimed responsibility for the attack.

Last May, Turkey's Reyhanli province near Syrian border, which has seen thousands of Syrian refugees as they flee civil war in their own country, was attacked in a twin-blast which left 52 people dead and 236 wounded.

With the Syrian civil war now well into its fourth year, airstrikes, often including the use of so-called barrel bombs, are targeting populated areas all over the country.

More than 100,000 people have been killed during the ongoing conflict, which has also internally displaced more than 6.5 million people, according to the UN. Over two million are now registered as refugees in neighboring Turkey, Lebanon and Iraq.