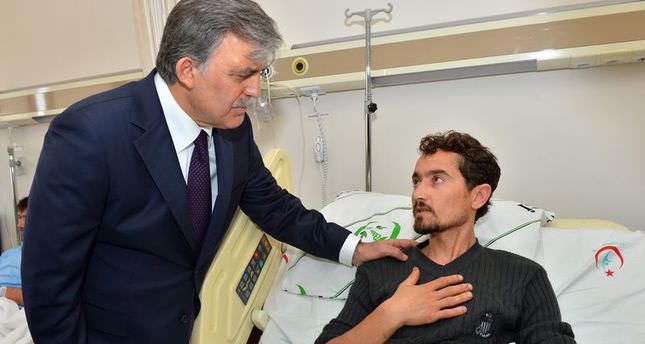 by Daily Sabah May 15, 2014 12:00 am
MANISA — President Abdullah Gül arrived at the site of a mining accident that has killed at least 284 miners in one of the country's worst ever industrial disasters.

After visiting the injured workers in the mine accident of Soma, he conveyed his condolences to victims' families.

Gül said that the nation's sorrow is very big, facing a huge tragedy after the accident. In his speech Gül called for unity. 'As a nation, we have to show great solidarity in this tragedy', he said.

"Unfortunately, ours is a great loss. The pain of each family and human is our own, and I would like everybody to know that the loss of one person means the end of the world for his loved ones," said Gül, who emphasized the need for everyone to cooperate and stand in solidarity as a nation.

Gül also indicated it was crucial for Turkey to revise its work laws and regulations and take comprehensive precautions, as such incidents are minimal in developed states. "We have recommendations under this scope as the State Supervisory Council," said Gül, who stated they would take all necessary measures to prevent such a tragedy from reoccurring in the future.

The president also expressed his condolences and prayers for the victims and their loved ones and stated the government will try its best to heal their wounds.