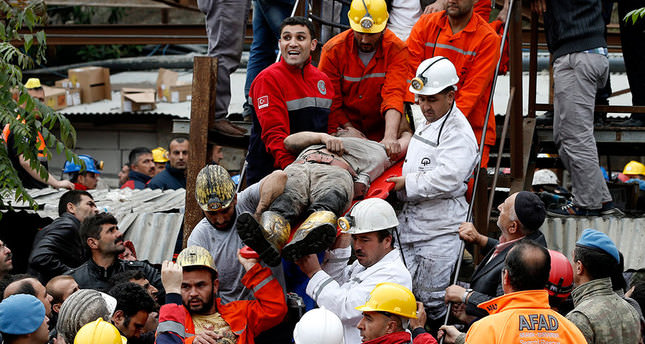 by AA May 15, 2014 12:00 am
MANISA, Turkey — Attempts to rescue trapped miners after a fire in a Turkish mine continue Thursday morning after a break of four hours, during which rescue teams were unable to enter the mine due to overpowering carbon monoxide fumes, said one Turkish government minister on a visit to the western Turkish mining town of Soma.

Rescue teams went back into the coal mine in Turkey where 283 miners died on Tuesday, after ventilation systems had pumped fresh air into the mine, said Family and Social Policy Minister Ayşenur Islam, who is co-ordinating the rescue along with Turkish Energy Minister, Taner Yıldız.

"Rescue teams, who had problems entering, are now back inside" said Islam.

Autopsies have been carried on 214 bodies so far and funerals have been held for the victims. Identification of at least 30 workers' bodies is still taking place, according to officials.

As the morgue in the town's hospital could not receive all the corpses, a cold storage warehouse was used as a morgue.

The cause of Tuesday's blast in the district of Soma in Manisa province in western Turkey is yet to be officially announced but it is suspected that an explosion and fire followed an electrical fault. Energy Minister Taner Yıldız ruled out the possibility of firedamp or a methane gas explosion, saying the deaths were due to carbon monoxide poisoning.

The death toll from the disaster has reached 283, minister Yıldız said Thursday morning.

The President is expected to visit the mine site on Thursday afternoon.

Since 1941 more than 3,000 people have died and over 100,000 have been injured in mining accidents in Turkey, according to figures from government statistics agency, TurkStat.

Mines and stone quarries are the most dangerous places for Turkish workers, more than 10 percent of work-related accidents in 2013 occured in the mining sector, TurkStat figures show.