As death toll surpasses 280, eyes turn to mine company's culpability 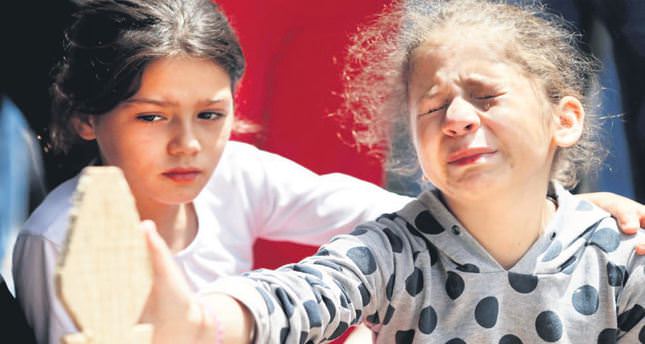 As the public demands justice for those who lost their lives in the devastating mine accident in Soma, the company responsible for the management, safety and security of the mine is mostly silent, protected by academics and unions that came to its defense soon after the disaster

MANISA — It has been alleged by some Turkish media outlets that the owner of a coal mine operated by Soma Inc., where 284 workers died in a mining accident on Tuesday, is being protected by media outlets, academics appearing on television and some worker unions. In particular the fact that the Soma mine does not have "safety rooms," which led to a higher number of casualties, has not been emphasized by many media outlets. In most platforms, mainly social media, it has been questioned why the owner of the mine where hundreds of people died has not been criticized more heavily. Some journalists and writers on social media are alleging that Alp Gürkan, the owner of the mine, has been spared criticism while Prime Minister Recep Tayyip Erdoğan and authorities in the government have been left to bear the brunt of public anger. However, some comments by Gürkan have been scrutinized heavily over the past two days. Gürkan emphasized in his interview with Dünya newspaper on April 29, 2013 that safety rooms were built in the Soma coal mine. "We always keep methane gas under control in the Soma field due to the risk of explosion. We have built strong rooms to meet the food and drinking needs of 500 workers for 20 days in case of any accident."

He also stated, "Turkish Coal Enterprises [TKİ] became profitable when it started to transfer business to the private sector with a royalty system. TKİ was mining a ton of coal for $130 [TL 272] to $140 [TL 293]. We gave a commitment of $23.80 [per ton], including the royalty share of 15 percent to TKİ in the tender." Alp Gürkan noted that this model made both them and TKİ earn and explained the profitability formula. "Our engineers and workers are not aliens. It is all about making meticulous planning and the working principle of the private sector," Gürkan expressed.

However, the explosion in coal mine has raised some questions. If the required measures were taken, how did such a catastrophe happen? A reporter from Daily Sabah investigated the allegations against academics and worker unions' protective attitude toward Alp Gürkan and his company.

Speaking to Daily Sabah, Dr. Hüseyin Yavuz, a professor at Süleyman Demirel University noted that after the rescue work ends, a delegation made up of veteran academics will prepare a report about what caused the explosion in the coal mine. "I do not think that media or government authorities are protecting Alp Gürkan. It is not justify behavior blaming Gürkan without having solid evidence," Dr. Yavuz said. In an answer to a question about whether Turkish academics and mining engineers are capable of preparing a objective report regarding the Soma accident, Yavuz remarked that Turkish academics who are familiar with the mining sector's problems in the country and the specific features of mines in Soma district can prepare a detailed report. Some academics at Istanbul Technical University (ITU)'s Mining Faculty have given consultancy service to the Soma Mining Company, which is considered the reason behind the effort of justifying the company.

A Daily Sabah reporter spoke to Dr. Cemal Balcı, the vice chief of the mining faculty in ITU, however he declined to comment on the issue. Another academic in the same university, Dr. Gündüz Ökten said that he did not participate any academic work focusing on the coal mine the explosion occurred in. "However, once the mine started to run, I was told that Soma Mining Company had taken every single step to provide a safety working place. That mine is known for its high-tech measures, which are quite expensive and not commonly used in Turkish mines," he said.

An occupational safety specialist who spoke to Daily Sabah remarked that if the required measures were taken, those workers would not die. "There are some contradictory statements about the matter. Academics, media and some worker unions are keeping silence regarding the accident. Government authorities are on purposely taken fore front as if they were the only responsible ones about the matter," he said.

Özgür Özel, the deputy of Manisa from Republican People's Party (CHP) accused trade and labor unions of being responsible for Soma coal mine blast due to the internal politics of the union. "The trouble in the Soma mine was that the competent trade union was unable to carry out its main tasks," said Özel in an interview. Apart from the role of employer to offer guidance on health and safety procedures, Özel confirmed that responsible trade unions did not carry out any measures to improve safety at the mine. The question of who are the real responsible people for the accident still remains. Accident report is expected to reveal the concrete results.
Last Update: May 16, 2014 1:48 am
RELATED TOPICS