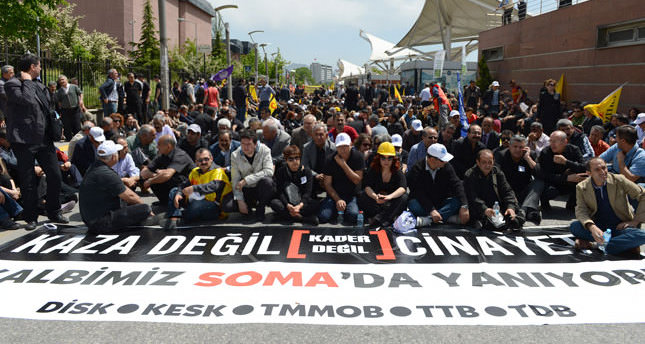 by daily sabah
May 16, 2014 12:00 am
MANISA — Demonstrators convened yesterday in various cities across Turkey in protests organized by some labor unions over the mining accident in Soma. Protests followed a call the previous day by the Confederation of Revolutionary Trade Unions (DİSK), the Confederation of Public Workers' Unions (KESK), the Union of Chamber of Turkish Engineers and Architects (TMMOB) and the Turkish Medical Association (TTB). DİSK called on union members not to work on Thursday and stage protests against what they called the state's neglect in the inspection of the mine.

In Istanbul, a group of demonstrators from the abovementioned unions and chambers converged in the district of Gayrettepe on the European side and attempted to march to the local directorate of the Social Security Agency in the Beşiktaş district. Riot police deployed at the scene prevented the crowd from marching. Using loudspeakers, the police tried to convince the demonstrators to disperse, citing it was not appropriate to march on "a day of national mourning." Demonstrators peacefully dispersed after reciting a statement regarding the accident.

In the western city of İzmir, riot police fired water cannons on a crowd that converged for an unauthorized rally when protesters did not heed police warnings and hurled stones at riot police. DİSK President Kani Beko also attended the rally in İzmir and was hospitalized when he fell unconscious from tear gas police fired on protesters. Union activists later held talks with the police who allowed them to make a press statement. Miners from various unions in the provinces of Zonguldak, Amasya, Rize and Yozgat did not work for one day and commemorated the victims.