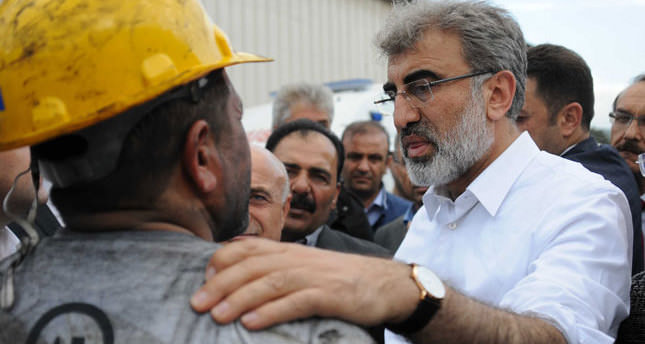 by Daily Sabah May 16, 2014 12:00 am
ANKARA — Energy Minister Taner Yıldız has been informing the public about the developments, sharing the sorrow of the families, calming those who fall victim to their anger, all the while coordinating the search and rescue operation in the mine.

Minister of Energy and Natural Resources Taner Yıldız is at the forefront of search and rescue operations in Soma. Traveling to the town shortly after Tuesday's explosion at a mine, the minister has been overseeing search and rescue efforts.

With a grimace of pain in his face, Yıldız first appeared before throngs of media crews at 05:00 a.m. on Wednesday, some 13 hours after the accident and gave the initial death toll as 201. His concerned look and remarks that the casualties may rise revealed the extent of the disaster. It will likely go down as the worst mining accident in Turkey's history as the death toll rose to 282 yesterday, 19 more than another mining accident in Zonguldak in 1992.

Looking disheveled and having discarded his tie, Yıldız continued updating the media throughout the day on Thursday about search and rescue efforts. Not leaving the site for three days, Yıldız comforted distressed relatives of miners when not coordinating the operations.
Last Update: May 16, 2014 1:49 am
RELATED TOPICS