Mine owner tries to shift blame, says not responsible for tragedy 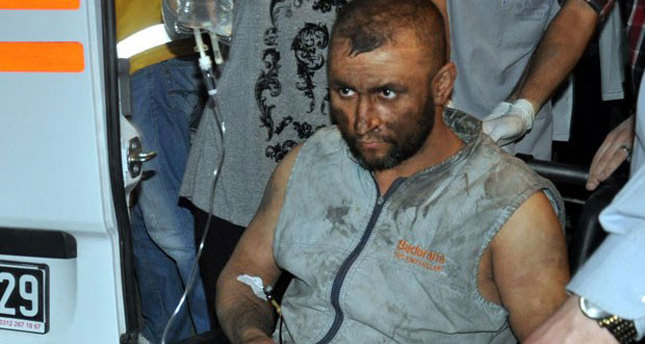 Facing the public days after the disaster, the executives of the Soma mine admit there was no safe room but claim they acted responsibly

ISTANBUL — Three days after a devastating fire in a coal mine in Soma killing nearly 300 miners, company director of Soma Mining Enterprises Alp Gürkan gave a press conference together with high-level executives from his company.

Gürkan emphasized that the fire was started by extreme heat spikes at the mine's core. Ramazan Doğru, the company's CEO, stated that the excessive heat increase could not have been prevented. "Cinders felt from the ceiling of the tunnels accelerated the fire which was also boosted by the air flow in that spot. The fire was not caused by the electrical system in the tunnels, as has been said," he noted. While officials from the Ministry of Energy said they have not yet entered the tunnels, the first clues indicate that the accident was caused by faults at the level of management. Officials also noted that the explosion of a transformer was unlikely to have happened, according

The Energy Ministry suggests an instant operating error was responsible as the area where fresh air was coming from burst into flames. "If coal is exposed to fresh air for a long time, it can catch on fire. This would be the main cause which suggests an operating accident," the ministry said. These are the initial findings revealed to the public, however the detailed results will be announced at the end of the investigation. The initial findings reveal a life and death situation underground. Sources said the miners were literally unable to see anything under their nose as the level of visibility was significantly reduced and the miners could not rush to escape. The issue of "safety rooms" came up as soon as the accident occurred. Just a few months ago during an interview, Gürkan had emphasized that there were "safety rooms" for 500 workers in the mine. At the press conference held yesterday, Gürkan and other officials from the company were importunately asked about the reported "safety rooms."

Doğru stated that the company had to relocate the "safety rooms" because tunnels were being rerouted. "There were no safety rooms where the explosion took place," he said, adding that the main problem was the smoke which covered the tunnels in three to five minutes.

"We tried our best, but we could not reach the core of the fire. It was completely extraordinary," Doğru said. The mine disaster in Soma has once again raised the question of how the jurisdiction reviews matters of "responsibility" and "training of workers." In one judicial opinion, the Supreme Court of Appeals stated, "If vital instruments are used, the possibility of an accident can be completely eliminated." In a 2004 case, the Supreme Court Assembly of Civil Chambers discussed whether employers and workers could be completely unaccountable in mine accidents and whether the nature of a case contains inevitability. In their judicial opinion, the assembly explained that mining accidents are not "inevitable" with the following expressions: "It is an undeniable fact that the possibility of an accident can be completely eliminated if the employer ensures that vital instruments for labor security are provided to the workers who may have an accident."

The 10th Civil Chamber of the Supreme Court of Appeals repeated the judicial opinion of the Assembly of Civil Chambers in a case heard in 2009. The District Court in the hearing noted, "According to expert opinion, the employer and workers did nothing wrong.

The accident happened 100 percent due to inevitable conditions." The Chamber reversed this judgment. In the same case, the 10th Civil Chamber of the Supreme Court of Appeals explained how "worker trainings in mines" are supposed to be conducted. The chamber replied the usual defense of employers in similar accidents like, "We provided our workers with due training" with the following opinion: "Workers' health, labor safety and worker training on the job being conducted can only be possible by ensuring necessary information is transferred and their significance is taught to workers through acting, not by provision of the documents containing some rules of regulation. The next step after the training is to control whether necessary precautions about the workers' health and labor safety are taken." During the press conference, Gürkan was also asked about his relationship with the government. "There is no reaction against me from the government. It was the first time I shook hands with the prime minister when he visited the mine after the accident. We do not have the slightest relation," Gürkan replied. to information received from miners.
Last Update: May 17, 2014 2:17 am
RELATED TOPICS