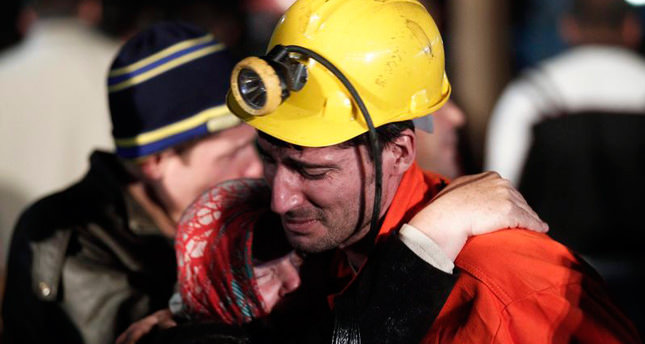 by AA May 17, 2014 12:00 am
MANISA — Rescue teams have retrieved Saturday the bodies of 17 miners from the still smoldering mine in Soma, western Turkey, bringing the death toll from the disaster to 301, Energy Minister Taner Yıldız said.

Speaking to reporters, he said teams entered parts of the mine which were previously inaccessible due to a fire after the blaze was put out.

He had previously said 15 bodies had been found, six of which were recovered. The reason for the discrepancy in the figures was not immediately known.

Responding to a question whether the workers died of carbon monoxide intoxication or fire effluent toxicity, Yıldız said the exact cause would be revealed after the autopsies, adding that DNA tests will be run to identify the miners before delivering them to their families.

"The mine is to be thoroughly searched again and the bodies will be compared with the applications of the families after the identification process is finished."

Tuesday's mine accident in Soma is the deadliest in Turkey's history surpassing an explosion of firedamp, a flammable gas found in coal mines, that killed 263 miners in Zonguldak in 1992.

The cause of the disaster is yet to be determined, but it has been mooted that an electrical fault, which resulted in an explosion and fire, is responsible.

Turkey's energy minister had said that any negligence on the part of officials or the company managing the mine will be punished.