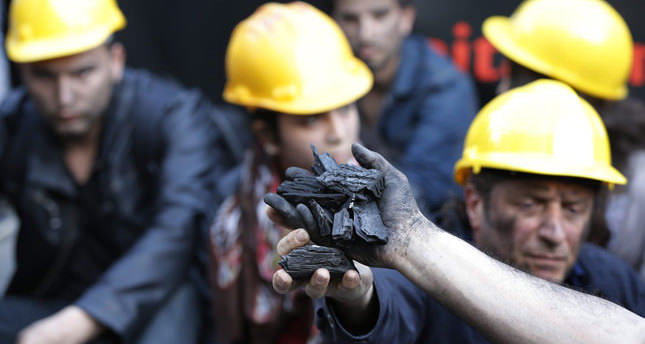 ISTANBUL — The mine where 301 miners were killed after a fire trapped them earlier this week in the western Turkish town of Soma wasMİ closed as part of an investigation yesterday. In a related development, 24 people including officials from the private mining company were detained. Five of them later arrested.

The suspects were brought to the courthouse in Soma amid tight security measures and questioned by the prosecutor. More detentions are expected as the judiciary investigation still continues, according to various Turkish media outlets. Ramazan Doğru, the mine's general manager, and Akın Çelik, the mine's operations manager, are among those who were brought to the courthouse but it is unknown whether they are being held or at the courthouse merely to testify. Abdurrahman Savaş, governor of Manisa province where Soma is located, told Anadolu Agency that 19 people were detained and five suspects are currently being questioned.

Savaş declined to elaborate on the identity of suspects and noted that the plaintiffs also testified at the prosecutor's Office. A press statement by the prosecutor's office is expected later on details of the detentions and investigation. Turkish media outlets reported that Alp Gürkan, CEO of the company operating the mine, engineers and technicians were among the detainees.

After examinations of the mine in Soma, a town in the province of Manisa, inspectors from Turkey's Labor Inspection Board have ordered the discontinuation of any underground activity in the mine. Inspections are ongoing in regards to the working conditions of the miners including working hours, pay and the execution of work carried out while inspectors are also examining the air-conditioning system, gas tracking system.

Inspectors confiscated the company's books with respect to work safety, gas measurement and ventilation works and construction plans of the mine. If the company's negligence is proven, the mine may be shut down permanently and a lawsuit may be filed against the company executives on charges of negligence and wrongful death.

Along with the Labor Inspection Board, inspectors from the Prime Ministry's Inspection Board are conducting an inquiry focused on public agencies which carried out workplace safety inspections in the mine.

The mine had undergone 16 inspections from 2012 to 2014 according to the government. Alp Gürkan denied any negligence and told reporters they had taken measures for workers' safety. Officials from Ministry of Labor and Social Security found several flaws in the mine during inspections between 2012 and 2013 including lack of a shutdown mechanism at electronic boards, lack of an assembly point in the case of emergency and absence of a warning system in conveyors.

Inspectors then ordered the company to address these shortcomings and the new investigation will determine whether those are addressed. An initial report of inspectors published by Turkish media outlets indicates there was an inadequate number of devices to measure carbon monoxide levels in the mine and the gas emitted from coal could be measured if those devices are placed at several spots in the mine. The report also cites an inadequate number of fire detectors, metal support in the ceiling for the reinforcement, well-trained personnel, backups of power and ventilation systems. In a statement, the Labor Inspection Board said 2,079 mines were inspected in the past two years and operations of 119 mines were suspended over safety violations.

Search and rescue efforts were concluded in the mine on Saturday. All crews evacuated the mine upon the order of inspectors. Currently, inspectors, gendarmerie officers and miners assisting them are in the mine for the investigation. The cause of the blast is unknown for the time being. Initial reports indicated that a faulty power distribution unit caused the fire whose noxious fumes shortly led to mass deaths. Government officials have promised a thorough investigation.

Dozens of prosecutors were assigned on Friday to oversee post-mortem examinations. Over 480 workers survived the disaster, the government's emergency agency announced.

The fire in the mine has not been extinguished completely though the fire is not expected to hamper the inquiry. It is the deadliest mining accident in Turkey's history surpassing a firedamp explosion that killed 263 miners in Zonguldak in 1992. Minister of Energy and Natural Resources Taner Yıldız who has been supervising the search and rescue operations in the mine since the accident occurred on Tuesday, promised earlier that any negligence on the part of state officials or the company running the mine would not go unpunished. Yıldız noted that a judiciary and an administrative investigation were launched. "Rest assured that a criminal and an administrative inquiry were launched. There will be consequences.

We lost our brethren and we will not tolerate any mistake," he told reporters on Friday. The prosecutors have also launched a probe into the mining accident. A team of prosecutors are looking into evidence to determine who may be responsible for the accident.

All evidence related to the accident in the mine and the company's office in Soma were seized and officials are examining the transformer which allegedly caused the accident.

The transformer is under police protection against any attempts to tamper with the evidence. A total of 11 prosecutors are tasked with the identification process and a team of three experts are working on determining the causes of death. Twenty-eight prosecutors appointed by the Supreme Board of Judges and Prosecutors (HSYK) are also in Soma, conducting investigation on the accident.

Officials have begun to collect testimonies from witnesses and victims, according to the prosecutor's office. The views of an occupational safety expert committee, composed of electrical engineers and experts in mining, will also be included in the investigation.
Last Update: May 19, 2014 10:31 am
RELATED TOPICS