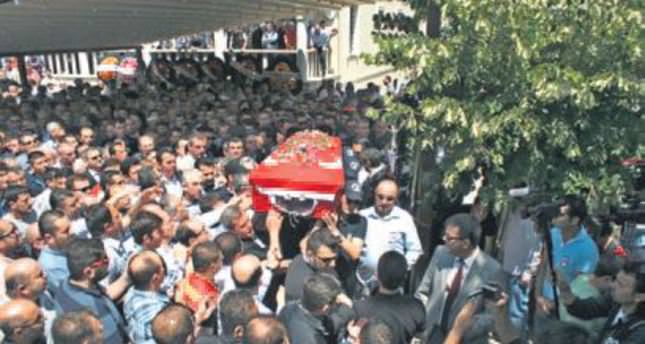 by Anadolu Agency May 19, 2014 12:00 am
ISTANBUL — Funeral prayers and burials for 301 miners who perished in Tuesday's mining accident continued yesterday, one day after search and rescue work concluded. As relatives buried victims, miners are being commemorated across Turkey. A memorial service was held for the lost miners at a church in the southern province of Adana. The Christian community in the province and other provinces near Adana gathered at St. Paul Catholic Church, also known as Bebekli church, for the service. Reverend Francis Dondu presided over the service and said, "We are here today to share the pain of our friends. We pray for Soma.
Deaths in Soma deeply affected us."

On Sunday, funerals were held for miners whose bodies were recovered from the mine. Rıdvan Kazancı, 19, was employed at the mine with his father Şerafettin. His father had a day off when the accident occurred but his son was killed in the explosion. When the young miner was buried in his hometown Karabük province in northern Turkey, Şerafettin Kazancı said, "I last saw my son while he was going to work in the morning. I heard the explosion and went to the mine. I waited there for four days for his body to be recovered.
I lost many friends there as well." Kazancı added that he will never work in a mine again.

İbrahim Çelik, a mining engineer who died in the accident, was also buried in his hometown Denizli in the western Turkey. Çelik initially survived the accident but went back into the mine to rescue his friends and was killed.
Last Update: May 19, 2014 1:06 am
RELATED TOPICS