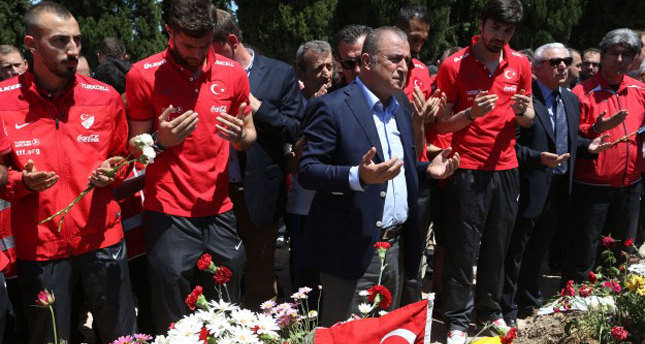 by AA May 19, 2014 12:00 am
ISTANBUL — The Executive Board of Turkish Football Federation and the national football team visited cemeteries where victims of the deadliest mining disaster in Turkey's history were buried, on Monday, in the western province of Manisa.

The footballers and executives extended their condolences to the relatives of the victims and laid carnations in the cemeteries as they prayed for the deceased miners.

The horrific mining disaster caused nationwide grief as Turkish nationals continue to mourn the dead miners on the national day commemorating the start of the war for Turkish independence.

On May 13, in a coal mine located in the Soma town of Manisa, a total of 301 miners were killed following a blast, the cause of which has yet to be determined. This marks the deadliest mining accident in Turkey's history, surpassing a firedamp explosion that killed 263 miners in Zonguldak in 1992.