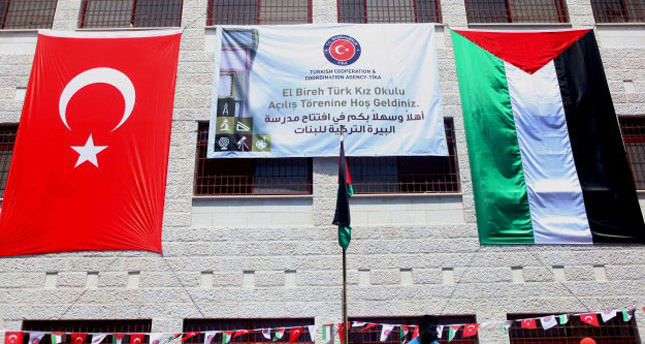 by AA May 19, 2014 12:00 am
RAMALLAH — The Palestinian Education Ministry on Monday officially inaugurated a Turkish high school for girls in the occupied West Bank's Ramallah and Al-Bireh provinces in cooperation with the Turkish Cooperation and Coordination Agency (TIKA).

Erdogan congratulated students on the opening of the school and wished them well in the future.

He said TIKA had carried out 15,000 projects worldwide since its inception in 1992.

The Turkish premier added that the agency had carried out 13,000 projects over the last 11 years and that Turkey had offered some $3 billion in foreign aid during 2013.

Partially launched at the beginning of the 2013/14 academic year, the Al-Bireh Turkish School for Girls currently caters to 500 female Palestinian students.

The school, which boasts several science labs and classrooms, also has a 28-strong female teaching staff.

Mustafa Sarnic, Turkish consul-general in Jerusalem, attended the school's inauguration, along with a host of Palestinian officials.