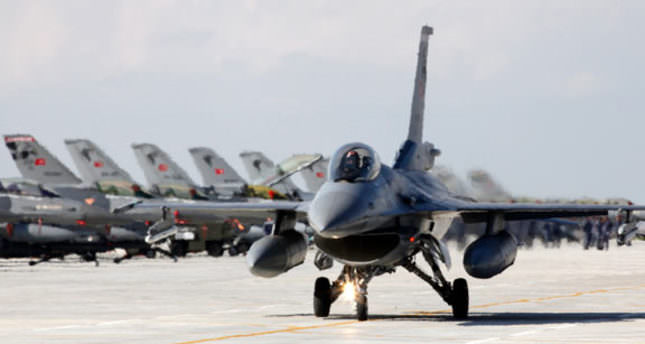 by AA May 20, 2014 12:00 am
BERLIN — German Chancellor Angela Merkel has praised Turkey's potential in space and aviation during the opening of the Berlin Airshow. Merkel made her comments in the German capital on Tuesday at the show - one of the world's three most important aerospace trade fairs - of which Turkey is the official partner country.

"Turkey's space and aviation industry has effective innovation potential," Merkel said during a joint speech with Turkish Minister of Transport, Maritime and Communication, Lutfi Elvan. Underlining the importance of the space and aviation sector, she stated that the number of people working in the field had increased by 4.8 percent in Germany, while the income from it had risen by 7.8 percent last year, compared to the previous year.

Elvan said: "Germany is one of the most important allies of Turkey. Both countries are cooperating in many fields, especially in the defense field. "The agreement made in 2008 in the field of the defense industry, especially, has increased bilateral relations." Elvan said Turkey's defense sector had "developed significantly over 10 years" and the country's aim was to "increase defense industry exports to ?2 billion (US$2.7 billion)."

The German chancellor also expressed her sadness over the 13 May coal mine accident in Turkey's western city of Manisa, in which 301 workers died. "The bitter news which came from the coal mine in Turkey hit us in Germany as well," she said.

The number of Turkish exhibitors has increased continuously at the show, organized by the German Aerospace Industries Association and Messe Berlin GmbH, since the country began taking part in 2008.

Since the introduction of the partner-country concept, previous partner nations at the exhibition have included Russia in 2006, India in 2008, Switzerland in 2010 and Poland in 2012. Established in 1909, the exhibition claims to be the world's oldest air show, and is among the largest and most important aerospace trade fairs.

The main display sections for 2014 include commercial air transport, space, military aviation, helicopters and both civil and military unmanned aircraft systems, also known as UAVs. About 125,000 trade visitors are expected at the five-day air show with around 4,000 journalists from 70 countries covering the fair.