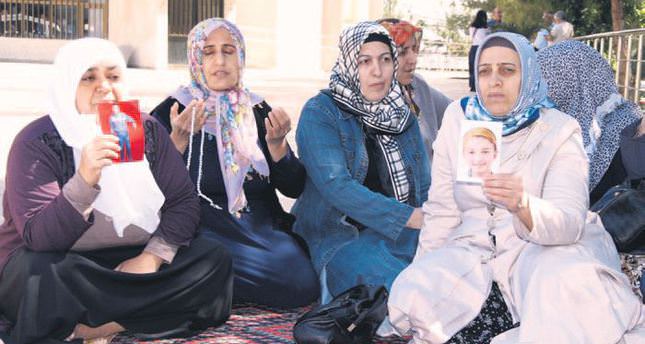 by May 21, 2014 12:00 am
DIYARBAKIR — A group of Kurdish families staged a sit-in in front of the town hall in the southeastern Turkish province of Diyarbakır yesterday to protest the recruitment of their children by PKK. They claim PKK forcibly recruited their children in April. Holding banners condemning "abduction" and pictures of their children, families claimed their children were forced to join the PKK while at a picnic in the province's Lice district on April 23. Their children, all high school students, were on a picnic organized by a local non-governmental organization in a rural part of Lice. A group of PKK members allegedly captured five children there to recruit them as members.

Safiye Gündüz, mother of 15-years-old Halime, said she has not seen her daughter since last month and missed her. She said they filed a complaint to security forces but no one was able to locate her daughter. "Female militants persuaded my daughter and others to join PKK," she said. "They took her to a picnic in Lice. Her friends brought me her school bag and told me militants convinced her to join the PKK. They said my daughter resisted at first but they tricked her telling Halime they were fighting for her family and the Kurds."

Gündüz said her husband worked in Iraq and she was living with her daughter in Diyarbakır. "I have no one else. My daughter is young, she does not know what the PKK does. I appeal to authorities to bring her back," she added.

Mahfuze Eren, mother of 15-year-old Fırat Aydın Eren, said her son is too young to be volunteered to join the PKK. "He is only 15," she said. Eren said her son was a model student and "does not know how to fight." "He cannot kill anyone and I don't want him to kill people. We will continue our protest here until our children return. We want peace and we don't want people to die, be them militants or soldiers," she said. Eren stated she was confident the government will bring back their children. "I believe the peace process will prevail," she said, referring to government's reconciliation initiative to end the conflict with the PKK. "These children are innocent but tomorrow, they will call him a terrorist if he stays with the PKK," she said.

Mother of Hatip Temel, 15, who went missing after attending a pro-PKK rally in the southeastern city of Şanlıurfa, also joined the two women's sit-in strike. Emine Temel said Hatip was her only son and she did not want her to die in terror attacks. Hatip Temel is presumed to have been recruited by the PKK during the rally. Three mothers vowed to continue their sit-in strike until their children return. For years, Turkey's southeastern and eastern regions have been bastions of the PKK's bloody campaign that killed over 30,000 people.

In 2012, the government launched a reconciliation process and passed a series of reforms to end the decades-old conflict and restore rights to the Kurdish community. The PKK declared a de facto ceasefire after the reconciliation process took hold and Turkey did not see any significant terror attacks following the truce. Nevertheless, in the past months, the organization has stepped up its activities again, kidnapping people in the eastern and southeastern cities and firing on security forces. PKK's recent attacks are linked to the construction of new military outposts in those regions for border security. After "pulling out" from Turkish territories, PKK militants returned to their hideouts in the mountainous regions of northern Iraq bordering with Turkey.
Last Update: May 21, 2014 1:37 am
RELATED TOPICS