Turkey hands over leadership of CICA to China 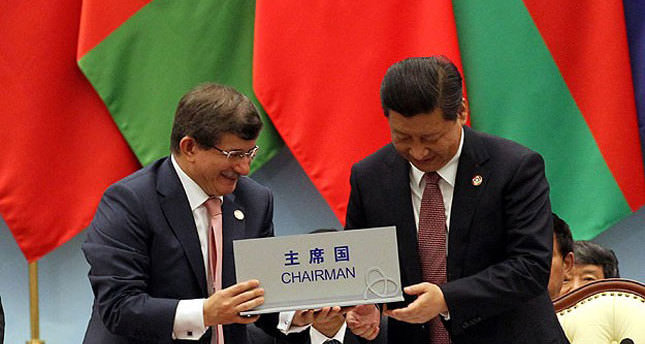 by AA May 21, 2014 12:00 am
SHANGHAI — Turkey has handed over to China the chairmanship of an international forum on Asia after the end of a two-day summit on Wednesday. The fourth summit of the Conference on Interaction and Confidence Building Measures in Asia (CICA) concluded with statements from former chairman Turkey, new chairman China and founder Kazakhstan. The gathering, hosted by China in the city of Shanghai, sought to enhance cooperation towards promoting peace, security and stability in Asia, according to the forum's website.

In his closing address to the summit, Turkey's Foreign Minister Ahmet Davutoglu announced the handover to China and thanked member states for their condolences regarding a mining disaster in Turkey that killed 301 people in the western town of Soma, marking the worst mining tragedy in Turkish history.

In his speech, Davutoglu recognized the conference's founder, President of Kazakhstan Nursultan Nazarbayev, and praised the forum for its role in global peace. "[The forum] will be a turning point for peace, stability and cooperation for the whole world," said Davutoglu.

Kazakhstan's President Nazarbayev told the gathering that the recent conference recorded the highest participation and expectations were high from China's term as chairman.

Established in 1992, the Conference on Interaction and Confidence Building Measures in Asia has 24 member states, with another nine countries and four international organizations participating as observers. Turkey was elected as chairman for the 2010-12 period and its term was extended til 2014. Qatar and Bangladesh, which previously had observer status, have joined the forum as the new member states, bringing the membership to 26 states.